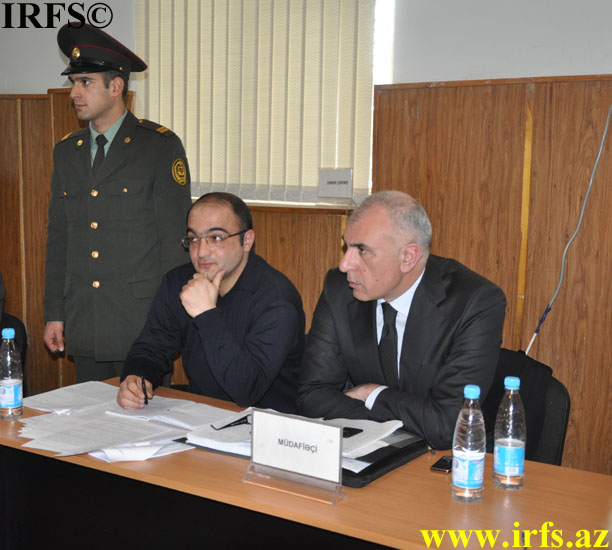 Today, 4 May, in the Garadag District Court, under the chairmanship of Judge Ismayil Khalilov, a hearing was held on the criminal case opened against Eynulla Fatullayev. Prison #12 Operation Attorney Eldar Ismayilov, Economy Department Chief Expert Shahmurad Soltanov and dining-room chief Ismayil Ismayilov were interrogated as witnesses.
E.Ismayilov, who composed the protocol to conduct a search on the suspect, confirmed that Fatullayev objected to the search and demanded for a lawyer. Ismayilov said that Fatullayev’s vest was not fully torn down and the substance found on Fatullayev was not measured. Ismayilov introduced a bulk of letters that were sent to Fatullayev on 28 December 2009, a day earlier before the search was held. To journalist’s Lawyer Isakhan Ashurov’s question, “did you feel any strange actions in Fatullayev on 28 December?” Ismayilov said, “No, I did not observe anything like that.”

Shahmurad Soltanov said that he was called to the search room by Bahruz Guliyev, who found drugs on Fatullayev. Shamsiyev, on whom drugs were also found gave a note stating that he did not have narcotics on him. Soltanov added the note to his testimony he gave to the investigation. When Ashurov asked that why the note was not written in the protocol regarding the search, Soltanov was not able to answer.

Dining-room chief Ismayil Ismayilov did not say anything new for the case and used sentences that were said earlier in witness accounts.

The European Court of Human Rights issued a decision regarding the case of imprisoned Editor-in-chief of Gundelik Azerbaijan and Realniy Azerbaijan Newspapers Eynulla Fatullayev. The decision states that the journalist should be released immediately and the Azerbaijani government should pay 27,822 EUR to Fatullayev in compensation.