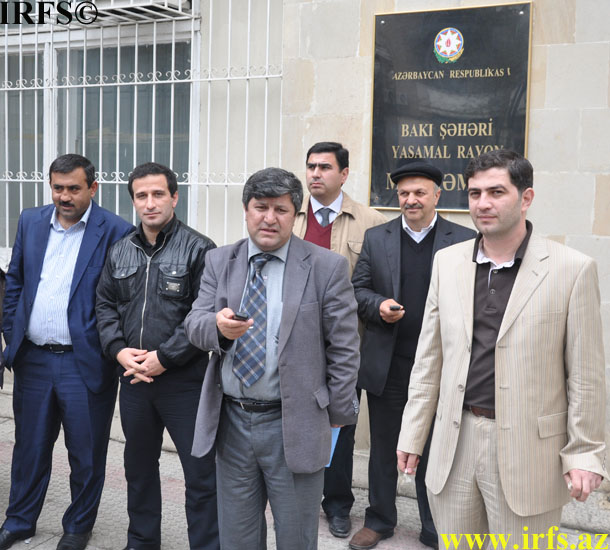 The special format lawsuit of former Prosecutor-general Iktiyar Shirinov against Khural Newspaper Editor-in-chief Avaz Zeynalli, Deputy Editor-in-chief of the Newspaper Malahat Zeynalli, and former Defense Minister Rahim Gaziyev was thrown out without being accepted for consideration. Plaintiff Ikhtiyar Shirin, defendants Rahim Gaziyev, Avaz Zeynalli and his lawyer Elchin Sadigov participated in the hearing.
The decision was adopted during the preliminary hearing held in the Yasamal District Court today (4 May), under the chairmanship of Judge Ragib Gurbanov.

Defendant Avaz Zeynalli’s lawyer, Elchin Sadigov, put forth a motion to throw out the lawsuit. He stressed that this lawsuit cannot be filed in the Yasamal District Court because Khural Newspaper is located in the Narimanov District.

“The Defendants’ fathers’ names and addresses are not shown in the lawsuit and this is against law,” said Sadigov and claimed that the lawsuit was unfounded and should be rejected.

Special plaintiff Ikhtiyar Shirin said that he defended his lawsuit and issued a motion to adopt a pre-trial decision against the defendants.

Avaz Zeynalli said that he agreed to the motion of his lawyer and added that defendant Malahat Zeynalli does not have any connection with the article in question; therefore the special format lawsuit filed against M.Zeynalli does not fit with either law or conscience.

Defendant Rahim Gaziyev stated that Khural newspaper should not hold any responsibility for this case. He added that in the article in question no insult or libel was committed against the special plaintiff.

After listening to the parties, the Judge said that the lawsuit was not composed in accordance with the legislation and issued a decision to throw out the lawsuit without taking it into consideration.

The lawsuit stems from Rahim Gaziyev`s interview that was published in Khural newspaper on 10-16 January. In the interview R.Gaziyev expressed his opinion regarding Ikhtiyar Shirin`s statements in the press. For this reason, I.Shirin appealed to court in the special format lawsuit and demanded that a criminal case be opened against the defendants under article 147 (defamation) and 148 (insult) of the Criminal Code.