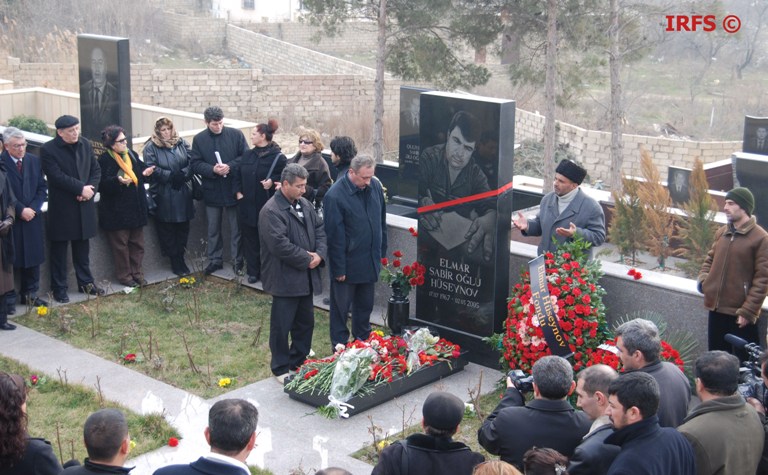 Yesterday (2 March) the third anniversary of "Monitor" magazine Editor-in-chief Elmar Huseynov's murder was commemorated. At the ceremony Institute for Reporters' Freedom and Safety Director Emin Huseynov read out appeal about the creation of a monument to slain "Monitor" magazine Editor-in-chief Elmar Huseynov.
In the appeal it is noted that a group of representatives from civil society and the public have been to Metbuat (Press) Prospect and conducted monitoring to choose a convenient location to erect a monument to Elmar Huseynov.
The group decided that the most suitable location for the monument on Matbuat Prospect is the place of torn down monument of Gazanfar Musabayov. Later in the appeal it is substantiated that the monument and the display of freedom of speech are very important. For this reason, in the appeal President Ilham Aliyev is asked to give an order for the allocation of land on Metbuat Prospect to erect a monument or a memorial to Huseynov. The appeal has been signed by 90 people. Among the signers there are leaders of political parties, NGO chairmen and representatives, media organization directors, journalists, the readers of "Monitor" Magazine, friends and relatives of the journalist, and ordinary citizens participating in the ceremony.

*The Institute for Reporters' Freedom and Safety started a signature gathering campaign in August for an appeal to the Baku city Executive Power to erect a monument to Huseynov. The signature gathering campaign ended on 14 November, and an appeal was sent to the Baku city Executive Power with 564 signatures. In response to this, the Baku city Executive Power wrote that it is able to execute erecting a monument to the memory of people who have achieved great deeds for their country only after a decision is adopted on the governmental level. Taking this into consideration, IRFS appealed to President Ilham Aliyev. The organization didn't get a reply to its appeal and sent a second appeal to the president about erecting a monument to Huseynov on 17 February. This appeal with signature will be the third appeal on this matter.
Previous Post