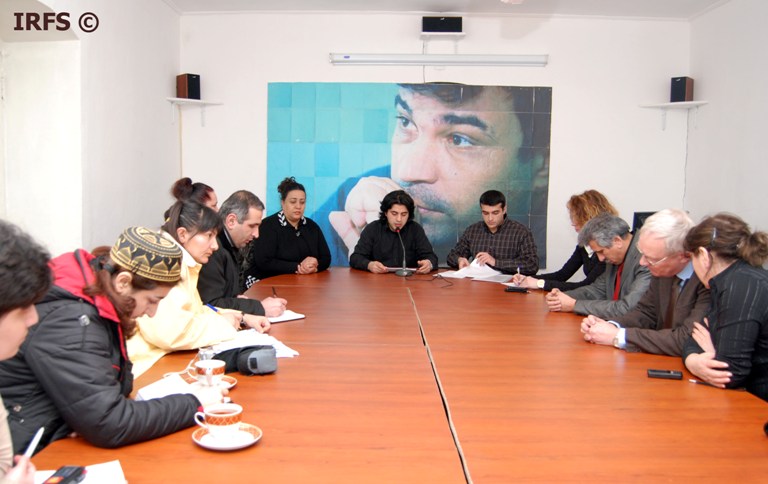 A roundtable on the 3rd anniversary of the murder of "Monitor" magazine Editor-in-chief Elmar Huseynov focusing on (the lack of) progress made in the murder investigation over the past three years and the current situation took place in the office of the Institute for Reporters' Freedom and Safety today.
Human Rights advocate Arzu Abdullayeva stressed that TV channels didn't show up at the graveside memorial service for Elmar Huseynov held yesterday, and said, "This is a sorrow for the whole country. Elmar was murdered, he didn't simply die. The society and the government have duties as well. They did this so that the event couldn't be broadcast. All talented people are either imprisoned or attacked and pressured here." She added that this situation was unacceptable and said, "The government must prove that it is innocent in this murder case. Why should the Azerbaijani people keep their heads low because of the government's inactivity? Whenever we decide to conduct protests police show up at the site before we do. How come no one was aware of Elmar's murder? He told his wife that he would be murdered when he left home on the morning that he was murdered. This means that he was followed at every step, but now it turns out neither the government nor the National Security Ministry was aware of Elmar Huseynov's murder. The government should make an attempt to find the murderers and to bring them to justice.” Abdullayeva made a suggestion, "Let the Organization Committee of Elmar Huseynov Fund, IRFS, Press Council and the Committee to Protect Freedom of Speech conduct a joint protest about Elmar Huseynov. Let's form a working group consisting of lawyers. This group should conduct an investigation and should inform the public about the results. And let's decide now on the steps we'll take in the future."
"Azadlig" Newspaper Editor Rovshan Hajibeyli said, "Since Elmar’s was assassination the pressures and attacks against the press have been on the rise. Instead of preventing these we step backwards. Neither newspapers nor other means of information publish anything about Elmar Huseynov. Yesterday – on the day of commemoration of Elmar Huseynov – speeches and meetings should have been conducted to support speech freedom. We can effect something this way. Although we know the murderers and people behind this murder, it is not uncovered.”
Norway's ambassador to Azerbaijan John Ramberg emphasized that Elmar was a friend of Norway and called on the Azerbaijani government to join forces to find his murderers as was promised by the officials. He noted, "This – Elmar's murderers being at large- deepens the tragedy. We always stressed that Elmar was the most prominent and the most courageous member of critical journalism."
IRFS director Emin Huseynov said, "We don't see any progress in the investigation of Elmar Huseynov's case. I deeply regret that close relatives of the journalist and journalists that faced pressures didn't participate in the yesterday's memorial for Elmar. How come, the journalists that were arrested for defamation unlawfully but were released later didn't show up yesterday? I assume that either our feelings disappeared or they are afraid of something. However civil society, local and international organizations did as much as they could to free them. Shabaz Khuduoglu published Elmar's writings for two years after his murder, but this year the continuation of Elmar's writings weren't published. I think there is pressure against Shahbaz Khuduoglu. They wanted to close his typography. Eynulla Fatullayev is in prison. The journalists witnessing these assume that the same destiny is awaiting them if they continue this work.  But I want to tell those people; it is not too late yet. We have to join and mobilize the society so that another murder doesn't happen in the future. In fact we need to raise this problem as society's problem, not as the Huseynov family's problem.  We need to force the government to find the murderers of Huseynov and to punish them."
Previous Post