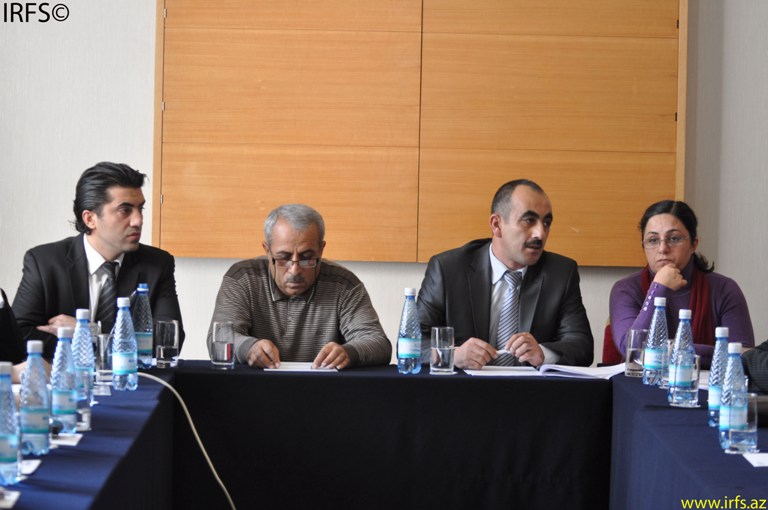 On 3 December, at the Park Inn Hotel, the Institute for Reporters Freedom and Safety (IRFS) presented a report on the first 3 months and on the broadcasting of the political officials in media (from 01 September to 01 December) in the framework of project titled “Human Rights and Media Monitoring”.
The project is being achieved in the Nakhchivan Autonomous Republic, and is supported by the Norwegian Ministry of Foreign Affairs.
IRFS chairman Emin Huseynov stated that the reports were prepared by IRFS employees on monitoring results held in Nakhchivan. Emin Huseynov called upon international and local human rights organizations to pay more attention to Nakhchivan, because freedom of speech and expression is especially limited there.
Huseynov also mentioned that IRFS would cover expenses of journalists, right defenders who want to go Nakhchivan, and that they are planning a visit to Nakhchivan  the near future for work.
“On the eve of the last parliamentary elections, and after it the tension was continuing in Nakhchivan. People are living in fear, they do not enjoy rights and freedoms in Nakhchivan,” Nakhchivan correspondent Elman Abbasov said.

“Not only political rights, but also civil rights are violated excessively in Nakhchivan. People’s land and property are taken by force,” said Hakimeldostu Mehdiyev.
Nakhchivan Human Rights and Democracy Development Center chairperson, “Turan” Information Agency correspondent in Nakhchivan AR Melahet Nasibova spoke about the difficult situation in the region. Nasibova pointed out that it was possible to protect human rights by attracting the attention of media, NGO, as well as the international community to the Nakhchivan AR.