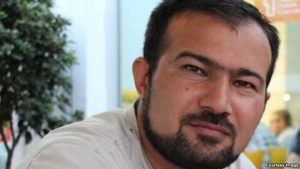 Imprisoned journalist Seymur Hazi has been granted the “Republicanist of the Year” award founded by D18 Movement.

Azadliq newspaper reporter, Azerbaijani Hour TV program host Seymur Hazi was arrested on August 29, 2014, after a fight with a man named Maharram Hasanov in Jeyranbatan settlement of Baku. He was charged under Article 221.3 of the Criminal Code (hooliganism committed by using an object as a weapon) and was sentenced to 5 years in jail by Absheron Regional Court on January 29, 2015. The decision was appealed, but Sumgayit Appeal Court upheld Seymur Hazi’s sentence on September 29, 2015.

Seymur Hazi’s father Mashgul Haziyev received the prize on behalf of his son and conveyed Seymur Hazi’s gratitude for the award.

Ruslan Izzatli, the head of D18 Movement, said journalist Seymur Hazi was selected for his outstanding work as Azadliq newspaper reporter and Azerbaijani Hour host, as well as his activity within Azerbaijan Popular Front Party.

D18 Movement picks out one person from a group of people perpetuating and cherishing Republican (Azerbaijan Democratic Republic) values in the society and grants him the “Republicanist of the Year” award. Previous winners of the award were REAL Movement’s jailed chairman Ilgar Mammadov (in 2014) and human rights defender Intigam Aliyev (in 2015) who at the time was in prison.