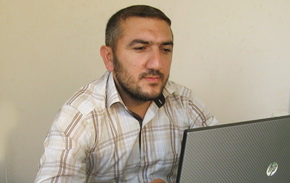 On January 21, Lankaran Grave Crimes Court held a hearing on the case of xeber44.com news portal chief editor Araz Guliyev. Judge Nizami Guliyev presided over the hearing, journalist’s brother Azer Guliyev reported to the IRFS. According to Azer, his brother’s rights were defended by court-appointed lawyer (public defender)Valiahd Habibov.Araz Guliyev was arrested on September 8th on charges of attempting to prevent an international folklore festival in Masalli region, and causing bodily harm to ordinary people and police officers. Masalli is a district in the south of Azerbaijan, close to the Iranian border. Xeber44.com reports on Islamic issues.

In response to public prosecutor Zohrab Aliyev’s question, “What was your aim in attending the international folklore festival in Masalli on September 8?” Guliyev said that he came to the conference solely to perform his professional duty.

The judge scheduled the next hearing for February 4, 10:00am.

Background: ArazGuliyev was arrested on September 8th on charges of attempting to prevent an international folklore festival in Masalli region, and causing bodily harm to ordinary people and police officers. On December 11th the previous hooliganism charge against Guliyevwas replaced by five new charges, under Article 228.1 (illegal possession of fire arms), Article 233 (violation of public order), Article 283.1 (inciting national, racial, ethnic or religious animosity and hostility), Article 315.2 (resistance and violence against a representative of the authority) and Article 324 (insulting the national flag or emblem of the Azerbaijan Republic) of the Criminal Code. ArazGuliyev rejects the charges, claiming that he was arrested for his journalistic and religious activities.

Defense of Arrested Journalist Hilal Mammadov to Be Strengthened