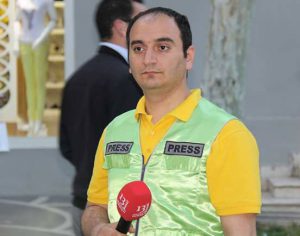 Baku Grave Crimes Court held a hearing on the case of Kanal13 internet television director Aziz Orujov. At the preliminary hearing chaired by Judge Mirza Khankishiyev, Orujov’s lawyers Javad Javadov and Hajibaba Azimov lodged motions. One of the motions, which sought that the journalist be removed from the courtroom cage and seated beside his lawyers, was granted by the judge. The motions to change the measure of restraint and to conduct video and photo recording of the proceedings were not granted.
The next hearing was set for 10 October.

Background: Nasimi District Court ordered Aziz Orujov’s pre-trial detention for 4 months on 1 June 2017. Aziz Orujov is charged under Articles 192.2 (illegal business) and 308.2 (service forgery, which has led to a serious consequence) of the Criminal Code.

Journalist Beaten Up by Police