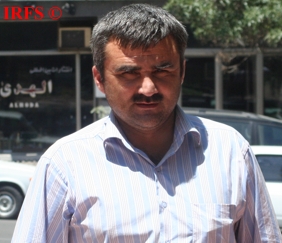 Today journalist Afgan Mukhtarli told the Institute for Reportera’ Freedom and Safety that he was illegally dismissed from his job at “Yeni Musavat” newspaper. According to Mukhtarli, he was fired because of his political intellect. A new negative campaign began against him because he supports Musavat Party leader Isa Gambar and Party’s stance, according to Muklhtarli.
“I was dismissed due to my regular objection against the opinions about Musavat Party and its Chairman,” said Mukhtarli. “Several people were fired before as well because they took the same position as I do.”
The latest of the arguments occurred yesterday during a meeting with first Deputy Editor-in-chief of the Newspaper Azer Aykhan. Mukhtali objected to opinions of Azer Aykhan against Musavat party and left the meeting. The Editor-in-chief of the newspaper R.Arifoglu told A.Aykhan to apologize to A.Aykhan and to continue his work. Mukhtarli said that he did not insult A.Aykhan and simply objected to him. Therefore did not apologize. Mukhtarli added that he hasn’t obtained the official order about his dismissal and that he will take necessary measures after he obtains it.
The Editor-in-chief of the newspaper R.Arifoglu confirmed the news about the dismissal of the journalist. According to Arifoglu, Mukhtarli was not dismissed because of his intellect but because of his rude behavior against other employees of the newspaper.
“Most of the employees are members of Musavat Party,” said Arifoglu. “Afgan Mukhtarli was dismissed because of his failure to go along with his colleagues. The latest of the incidents was an argument with Aykhan.  Mukhtarli used rude expressions against A.Aykhan and left the meeting. I have settled several cases like this. After yesterday’s incident, I told him to apologize to Aykhan and reconcile. However, he refused and I decided to dismiss him.
Previous Post