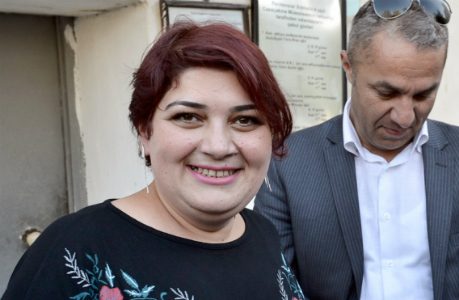 “Today, I was informed that my account in Kapitalbank was suspended at the request of the Ministry of Taxes on 8 November. There is going to be a court hearing in Baku Administrative Economic Court #1 with regard to this matter on 27 November. My bank accounts will remain suspended until the court renders a decision,” journalist Khadija Ismayil said.

Khadija Ismayil was arrested on 5 December 2014. She faced charges such as tax evasion and illegal business, and was eventually sentenced to 7.5 years in jail.

The journalist was released on 25 May 2016, after the Supreme Court commuted her original sentence to a 3.5-year suspended sentence.

On 26 September of this year, Khadija Ismayil was granted the Right Livelihood award.
She was also declared the winner of the Allard award instituted by the law faculty of the British Colombia University in Canada.

According to the journalist, she is unable to receive several of the prize money transferred to the bank. “I want my prize to arrive in Azerbaijan, so that I legally pay my tax to the state budget. To make this happen, I will continue my struggle within the limits of the law. I am going to appeal to the court,” she stressed.
The journalist added that if she cannot receive the prize money, she will request that they be used for investigations into the facts of corruption in Azerbaijan.