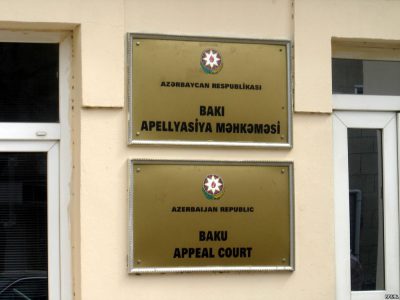 Baku Court of Appeal, chaired by Judge Elshad Shamayev, heard an appeal filed by NIDA member, abzas.net website employee Ulvi Hasanli, against Baku Military Court’s decision of 03 November 2017 on his complaint, in which he stated that he was illegally arrested, subjected to inhuman and degrading treatment, tortured and physically forced to serve in the army. The Court did not ensure Ulvi Hasanli’s presence, against lawyer Elchin Sadigov’s request.

Sadigov also filed a motion to arrange a medical examination for Hasanli and to ask the expert commission to determine whether he was fit for military service and whether there were signs of injury on his body. The lawyer noted that Hasanli was examined by military doctors in early October 2017 and was deemed unfit for military service due to three kidney stones. In this regard, the lawyer filed a motion for the examination documents to be presented to the court and for the military doctors to be questioned in court as witnesses. The lawyer added that in early October, Hasanli was told by the Ganja branch of the State Service for Mobilization and Conscription that he had been reported about and had to undergo repeat examination. Sadigov requested that the Ganja branch submit the said report to the court.

The next motions sought the questioning of the chief of the Ganja branch of the State Service for Mobilization and Conscription and the retrieval by the court of the surveillance and security camera recordings from the administrative building of the Military Police for the period 12 pm – 7 pm, 26 October 2017.

The Court rejected the motions and upheld the decision of Baku Military Court.

Note that, Ulvi Hasanli had been granted a respite from military service until 2019 after undergoing a medical examination recently. However, afterwards, Hasanli received a phone call saying that he had to undergo a second examination and went to the Abdullayev Scientific-Research Cardiology Institute on 26 October 2017. The chief of the Ganja branch of the State Service for Mobilization and Conscription also came there at that time and told Hasanli that he had to go to the Military Police of the Ministry of Defence. After 20-30 minutes of waiting, three officers came from the Military Police, grabbed him by his arms and took him to the administrative building of the Military Police through the use of physical force. From there, he was sent to military service.