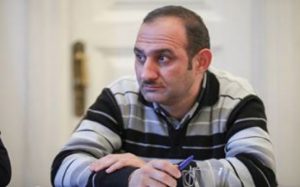 Bizim Yol newspaper senior journalist, Natig Javadli has been sacked for making a critical interview with free economy watchdog , he told the Institute for Reporters’ Freedom and Safety (IRFS) on February 21.
The newspaper did not offer even little explanation for decision to fire Javadli. He was just phoned and informed about it. Javadli says he tried to speak to the editor-in-chief, but could not reach him.
Notably, Javadli was sacked a day after he made an interview with economic expert Gubad Ibadoglu. The interview piece contained criticism of the state custom and tax policies. The critical interview was removed from Bizim Yol website on the same day as Javadli was sacked.
IRFS tried to get comments from the founder and chief editor of the Bizim Yol newspaper, Bahaddin Haziyev, but he declined to speak about Javadli’s discharge.