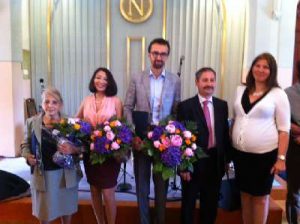 The presentation of Gerd Bucerius Free Press of Eastern Europe Award for the year 2012 took place in Oslo on June 20. Two representatives from Azerbaijan, photo and video reporter of the Institute for Reporters’ Freedom and Safety (IRFS) Mehman Huseynov and the correspondent of the Radio Liberty’s Azerbaijani Service Tehmine Tagizade were rewarded for their courageous reporting on such serious problems as corruption and violation of human rights in Azerbaijan.

Mehman Huseynov could not attend the award ceremony due to atravel ban imposed in connection with a criminal case filed against him, and the award was presented to his mother Firengiz Huseynova on his behalf.

Norway’s State Secretary Gry Larsen welcomed the journalist’s mother and criticized the Azerbaijani authorities for not permitting Huseynov to take part in the award ceremony.

Gerd Bucerius Prize was established by the German Foundation ZEIT and the Norwegian Foundation Fritt Ord. It is annually awarded to journalists and media outlets for independent reporting and protection of the freedoms of expression and media.

The first among the Azerbaijani media to receive the Gerd Bucerius Award was Turan News Agency in 2007.

Subsequent winners from Azerbaijan have been the columnist of Zerkalo newspaper Rauf Mirkadyrov, the investigative journalist Shahveled Chobanoglu, the Azadliq newspaper, the employee of the Bizim Yol newspaper Natiq Javadli, Internet TV ANTV-online, the columnist of the Yeni Musavat newspaper Haji Zamin, and the correspondent of the Radio Liberty’s Azerbaijani service Khadija Ismaylova.