JOURNALISTS NOT ALLOWED TO IMPLEMENT PROFESSIONAL WORK DURING PROTEST ACTION 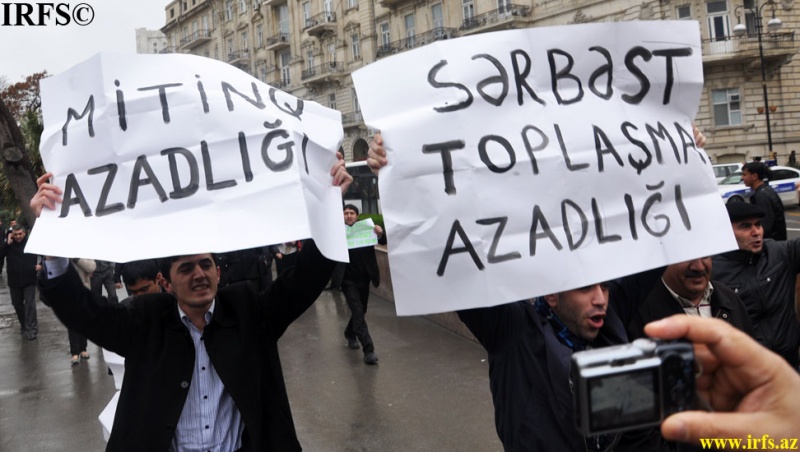 Today, 14 April, during a picket held by Musavat Party in front of the Baku City Executive Administration, police interfered in the work of journalists who implemented their professional work.
Civil closed young and fit people, controlled by police officers, detained the participants of the action and took them into buses behind Icherisheher subway station and distanced them from the area. These people blocked the journalists who wanted to prepare reportage and film the event. Then the journalists were pushed and distanced from the area.
Approximately 27 activists of Musavat Party were detained.
After the action was prevented from taking place, Baku City Police Office Deputy Chief, Police General Major Yashar Aliyev told journalists that 6-7 people were detained and taken to the Sabail District Police Department Police Unit #8 because they did not disobeyed police. Aliyev told the journalist that he did not recognize civil closed people who arrested people and interfered in the journalists` professional work.
“Those people you are talking about are not police,” said Yashar Aliyev. “If they impeded the work of journalists, you should file an appeal regarding it so we can take necessary measures.”
Musavat Party wanted to hold an action to demand for the assurance of freedom of assembly. However, the Baku City Executive Administration did not allow this action to take place.
Photo: http://www.irfs.az/component/option,com_datsogallery/Itemid,30/func,viewcategory/catid,478/lang,az/