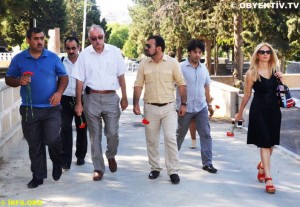 To mark the 138th anniversary of the National Press, a group of Azerbaijani journalists and media workers have paid tribute to the prominent Azerbaijani journalists. A group visited the graves of the founder of the Azerbaijani press Hasan bey Zerdabi, one of the creators of the contemporary independent press Najaf Najafov, chief editor of the magazine “Monitor” Elmar Huseynov and the journalists who died in the Karabakh war.

General Director of Turan Agency Mehman Aliyev said that the freedom of speech will eventually triumph, even though the number of the supporters of free media has decreased. Making a speech at the grave of Elmar Huseynov, Aliyev expressed his belief that great changes will happen in the country soon. “Today, visiting the graves of those who struggled for the freedom of media, we send a message to the public that people who are loyal to free press still exist. Struggles for the freedom of media continue.” – said Aliyev.

“After Elmar Huseynov’s death, some journalists decided to make a deal with the government to compromise their journalism. I am proud to say that there are still others who have chosen to report truth whatever it takes — and those are truly independent journalists.” said Azadliq newspaper commentator Seymur Hazi.

Speaking by the graves of journalists killed during Karabakh War, IRFS chairman Emin Huseynov said journalists fight not only for freedom of speech, but also for freedom of their Homeland. They sacrifice their lives to make the truth known to people.
By Zerdabi’s grave, journalists met his descendants who are unhappy with the authorities’ attitude towards his heritage.

“Hasan bey’s spouse, madam Hamida, who used to head a girls’ gymnasium in Baku, rests by his side without any grave monument. There is no monument to Zerdabi in Baku” said the enlightener’s grandson Settar Zerdabi, who has been residing in a dormitory for 30 years.