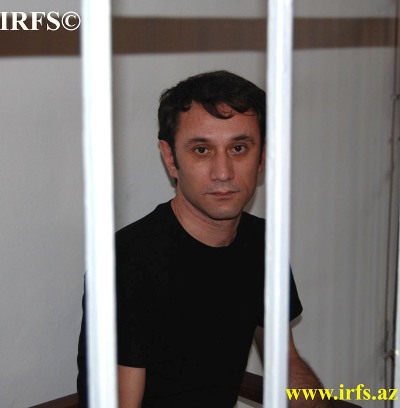 Today (7 June) a hearing on the case against Sergey Strekalin, who is accused of stabbing "Azadlig" Newspaper correspondent Agil Khalil, was conducted in the Nasimi District court under the chairmanship of Judge Shahin Abdullayev.
The hearing began with motions from Agil Khalil’s lawyer E. Sadigov. Sadigov demanded that the text messages that Strekalin claims Khalil sent to him be struck from the list of evidence. Sadigov said that these excerpts were received without a court decision.  However, the state prosecutor stated that they were received through the court decision. In reply to this, Sadigov emphasized that these excerpts were possible to get according to legislation only through a court decision. The judge tabled the motion, and said that he will return to this issue during the evaluation of written evidence.
Sadigov’s second motion was about inviting “Azadlig” newspaper employees Aga Jafarli, Vidadi Mammadov and Parviz Jabrayilov as witnesses. The lawyer said that these people witnessed that Agil Khalil was followed, and stressed that their participation in the hearing was important. The prosecutor objected to the motion, and it was subsequently rejected by the judge after a short deliberation.
Then Sadigov stated that there’s a certificate among the case materials given by NSM (National Security Ministry). “According to this certificate, Khalil was pursued by the NSM after he was beaten (22 February) and the phones of Azer Ahmadov and Vidadi Mammadov were tapped. This means that a person who had been followed by the NSM since 22 February was stabbed on 13 March. This is an incomprehensible situation. I am asking the court to keep this in mind and to consider it when adopting a decision,” he added.
The judge said that this issue will be considered when the decision is adopted.
Although the hearing was supposed to continue with the interrogating the witnesses, the judge announced a small break because the witnesses didn’t show up.  Witnesses were interrogated after the break. In addition, both Agil Khalil and “Azadlig” Newspaper Director Azer Ahmadov showed up at the hearing after the break. According to Khalil, police came to house and informed him that he had to attend the hearing, so he went.
Case witnesses Natig Rustamov and Rauf Javadov said they witnessed that Strekalin had narcotics on him and in his house. The prosecutor and Strekalin’s defense lawyer asked the witnesses questions. However E.Sadigov was not permitted to interrogate Rustamov or Javadov. The judge justified this decision noting that these witnesses are only related to the charge against Strekalin for possession of narcotics. Although Sadigov noted that both the stabbing and possession of narcotics was put forth in the same criminal case and only one hearing was being conducted on them, the judge ignored him.
After this, Strekalin’s driver Eldar Rasulov was called to witness stand. Narcotics were also found in the vehicle (the vehicle belongs to Strekalin) that Rasulov was driving. A criminal case was opened against Rasulov and his case is under investigation. After he confirmed the statements he made during the preliminary investigation (which was aired on TV), he started to answer questions. This time he made several contradictory statements. Rasulov said that it was dark when the incident happened and the lights inside the car were off. However, he said that the person who had an argument with Strekalin was dark-skinned and had long hair, but didn’t recognize Khalil from his face.
The next hearing was scheduled to take place on 11 July at 11:00 am. The judge noted that the next hearing will continue with the interrogating of witnesses and investigation of written evidence.