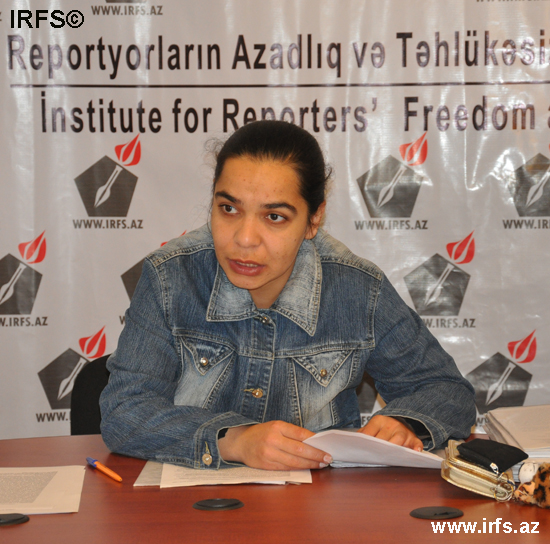 Today, 5 November, in the press center of the Institute for Reporters` Freedom and Safety (IRFS), Citizen Sayyara Heydarova conducted a press conference regarding new facts found out during the trial on the criminal case opened against her.
Sayyara Heydarova said that the criminal case opened against her April 2005 claiming that she beat four men was proved to be spurious.  Sayyara Heydarova called on the state plaintiff to deny the prosecution and provided the following statement:
“Asgarov Yashar Khalil oglu who was allegedly beaten by me was arrested for robbery and is being held in prison #2,” said Sayyara Heydarova. “On 23 October 2009, in the Baku Appellate Court, Judge Gail Mammadov fulfilled my motion and said that he will ensure that Asgarov Yashar will take part in the hearing. I want to emphasize that none of the judges had fulfilled this motion during the last four years.”
Sayyara added that the next hearing on this case will be held in the Baku Appellate Court on 10 November, at 11:00 a.m.  She called on the media representatives and public to participate in the hearing.
Citizen Sayyara Heydarova was sentenced to 2 years 7 months and 15 days of corrective labor with one year conditional imprisonment (probation) under articles 221.1, 221.1 and 221.3 of the Criminal Code.
Previous Post