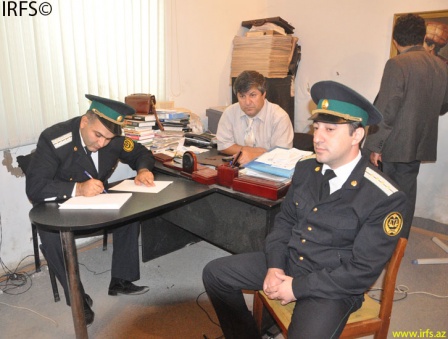 Today executors from Narimanov District Court reviewed the property of Khural newspaper’s editorial office, and the equipment obtained after the daily publication of the newspaper was included in the inventory.
In May of this year, the property of Khural newspaper was inventoried for a lawsuit filed by the executive director of the State Support Foundation to Mass Media Vufar Safarli and the head of the Presidential Administration Ramiz Mehdiyev. They sued the newspaper for 5000 AZN and  10 000 AZN, respectively. The editor-in-chief of the newspaper Avaz Zeynalli, told Objective TV that he has sent an appeal to the court asking to terminate the execution as he can’t afford to pay the fine. The editor-in-chief emphasized that the inventory is a politically motivated response to articles published in Khural newspaper that were critical of the Azerbaijani government and president.

The court executors included the property of the Liberal.az website, whose office is situated in the same building, and computers lent to Khural by other organizations in the inventory. Objections to the inclusion of items not owned by Khural were made by Zeynalli, human rights defender and director of IRFS Emin Huseynov, and the director of the Liberal.az, Afgan Mukhtarli, but were ignored by the executors. Afgan Mukhtarli said that he will appeal to the court regarding the illegally inventoried property of Liberal.az. The court executors said that this inventory is not politically motivated, and that they are carrying out their duties.

Editor-in-chief of Khural newspaper Avaz Zeynalli held a press conference to speak about the recent actions against Khural newspaper. During the conference, media representatives condemned the incident with the editor-in-chief of Yeni Musavat newspaper, Rauf Arifoglu, denouncing the inventory and fine as pressure against freedom of speech and freedom of the press. The director of Turan Information Agency, Mehman Aliyev, said that he will raise the issue at the OSCE conference in Georgia tomorrow. He said that he will also discuss the issue at within the Editors’ Union.

To note, the court executors were at the Khural newspaper office from 10:00 until 16:00, today.