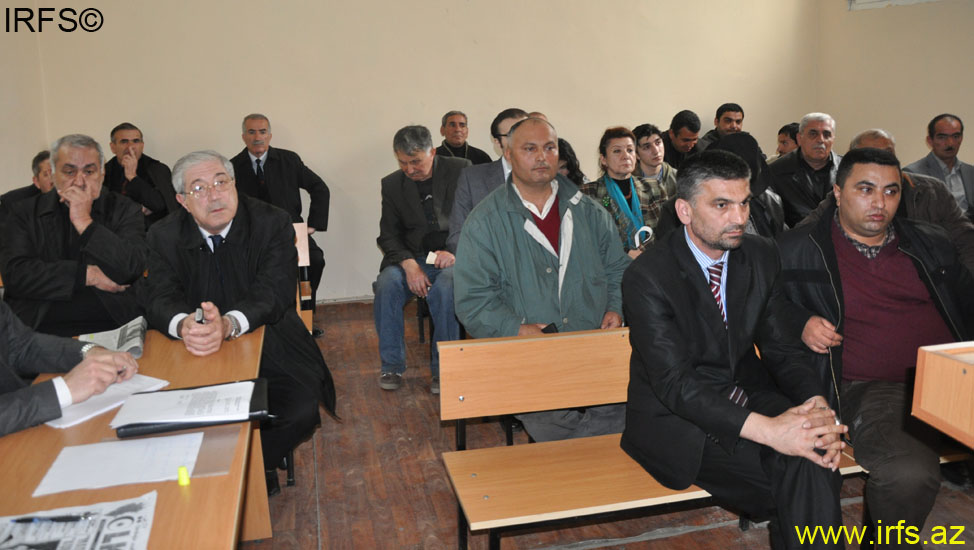 Yesterday, 15 April, in the Yasamal District Court, under the chairmanship of Judge Khagani Mammadov, a preliminary hearing was held on the lawsuit of National Union Movement Head Lale Shovket against Olke newspaper.
Plaintiff representatives Avaz Temirkhan, Elkhan Abbasov; defendants Rafail Bejanov, Nijat Daglar (Huseynov), Elmidar Aliyev, Nasimi Sherefkhanli, Zulfugar Huseynov; and the newspaper’s plenipotentiary Azer Rasulov participated in the hearing.
The plaintiff’s representative Elkhan Abbasov filed a motion to film and take photos during the hearing. The judge partially fulfilled the motion and allowed them to film for 5 minutes.
Olke newspaper representative Azer Rasulov said that he was not familiar with the case, and filed a motion to postpone the preliminary hearing. Rafail Bejanov filed a motion that Lale Shovket should participate in the hearings. The judge issued a decision to not fulfill both of the motions.
The hearing on this case was scheduled for 27 April at 4: 30 p.m.
On 11-17 February Olke newspaper published an article entitled “Who is the agent with the nickname ‘Madam.’” L.Shovket claimed that information about her not conforming to reality found its place in the article, and therefore, demanded that a refutation be published in the newspaper, and that they apologize and each pay 100 000 AZN in fines. It is noted in the lawsuit that the amount received from the defendants via court decision should be deposited into the account of special facility in Bilgah village for war and labor invalids.
Weekly Olke newspaper began operating in February 2008.
Previous Post