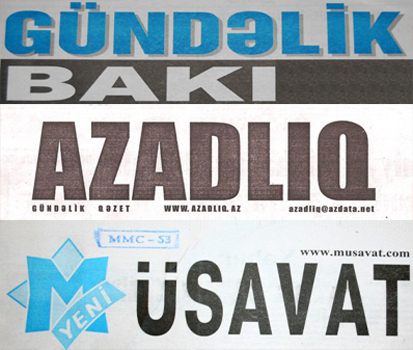 Today, in the Nasimi District Court, under the chairmanship of Judge Emin Mehdiyev, a preliminary hearing was held on the lawsuit of the Director of Children’s Music School #3 Mehin Orujova against Gundalik Baki, Yeni Musavat and Azadlig newspapers.
The institute for Reporters’ Freedom and Safety was told this by Gundalik Baki newspaper editor-in-chief Habil Valiyev. Although the lawsuit was accepted for consideration, the judge did not consider the participation of the newspapers in the trial to be necessary, according to Valiyev. The judge stated that the newspapers will have to publish a refutation if Orujova’s lawsuit is fulfilled.
A teacher from the Music School #3, who claimed that her dismissal from work was unfounded, addressed an appeal to these newspapers. The newspapers then published articles about school director M.Orujova and the dismissal of the teacher. In her lawsuit the director asks the newspapers to publish a refutation and to fine the teacher in the amount of 10 000 AZN.
Previous Post

MOTION REGARDING PARTICIPATION OF PRESS COUNCIL CHAIRMAN IN HEARING FULFILLED