MOTION REGARDING PARTICIPATION OF PRESS COUNCIL CHAIRMAN IN HEARING FULFILLED 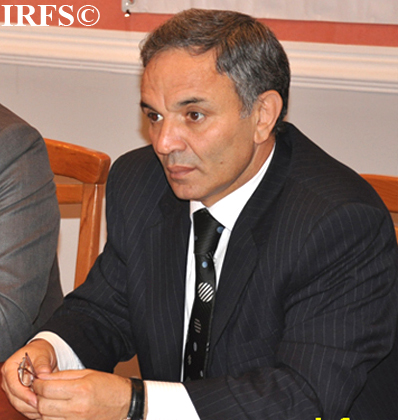 Today, 26 February, in the Nasimi district Court, under the chairmanship of Judge Ikram Shirinov, a hearing was held on the lawsuit of Tezadlar newspaper editor-in-chief Asif Merizli against Press Council Chairman Aflatun Amashov.
Tezadlar newspaper editor-in-chief Asif Merizli, his lawyer Alirza Habilov, and defense representative Shamsaddin Aliyev took part in the hearing.
Lawyer Alirza Habilov filed a motion regarding Press Council chairman A.Amashov’s participation in the hearing. The Press Council representative objected to the motion. The judge fulfilled the motion and said that Amashov should join the next hearing. The next hearing was scheduled for 3 March at 3:30 p.m.
On September 16, 2009, PC included Tezadlar newspaper on the list of “racketeering” publications after an article regarding the opening of Turkey-Azerbaijan borders was published in the newspaper on 29 August, 2009. The newspaper’s editor-in-chief A.Merizli considered it unfounded and appealed to court.
Previous Post