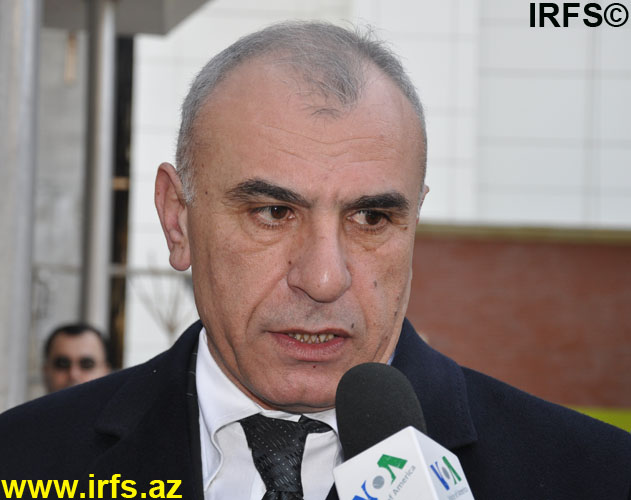 Today, 10 February, in the Baku Appellate Court, under the chairmanship of Judge Gunduz Guliyev, a hearing was held on the lawsuit of imprisoned Editor-in-chief of "Gundelik Azerbaijan" and "Realniy Azerbaijan" Newspapers Eynulla Fatullayev’s defense lawyer Isakhan Ashurov against the decision of the Yasamal District Court adopted on Ashurov’s lawsuit against Foreign Minister Elmar Mammadyarov on inactivity of high ranking official (to not respond to information inquiry).
Isakhan Ashurov said that he had to send another inquiry because the response to the inquiry addressed to E. Mammadyarov did not satisfy him. The lawsuit was rejected by the Yasamal District Court because it was not responded, added Ashurov.
The representative of the defense stated that they gave a detailed answer to the lawyer’s inquiry and demanded that the first instance court’s decision be upheld and the lawsuit be considered unfounded.
Judge Gunduz Guliyev upheld the decision of the Yasamal District.
On the basis of an appeal made to the National Security Ministry by E.Mammadyarov, a criminal case had been opened against Eynulla Fatullayev accusing him in threatening terror.   Mammadyarov claimed that citizens of foreign countries and business people working in Azerbaijan were alarmed by Fatullayev’s article “Aliyevs are Going to War”. Therefore Fatullayev’s defense lawyer Isakhan Ashurov sent an information inquiry to E. Mammadyarov asking to reveal the names of people who were alarmed, and then appealed to court since the inquiry was not answered.
"Gundelik Azerbaijan" and "Realniy Azerbaijan" newspapers' editor-in-chief Eynulla Fatullayev was sentenced to 2.5 years of imprisonment on 21 April 2007 for insulting honor and dignity.  Later he was convicted under articles 214.1 (threatening terror), 283.2.2 (incitement of ethnic/national, social or religious hatred abusing authority), and 213.2.2 (tax evasion) of the Criminal Code and was sentenced to 8.5 years of imprisonment on 30 October 2007.