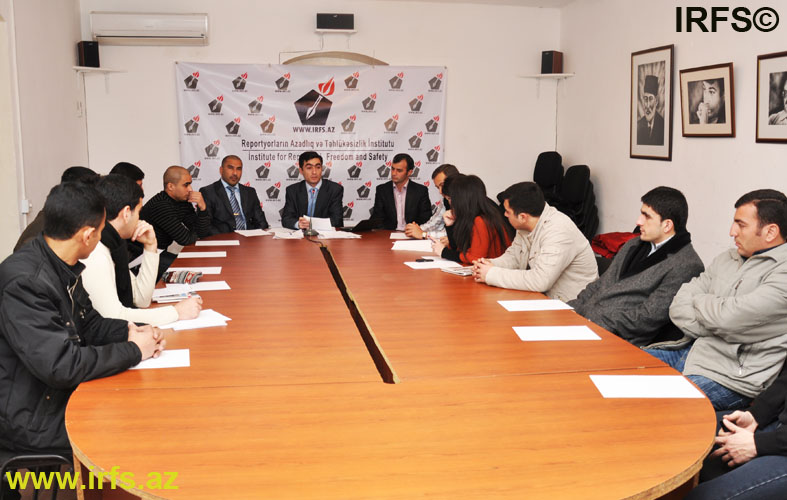 Today, February 10, in the press center of the Institute for Reporters’ Freedom and Safety, the Students International Cooperation Public Union conducted a press conference in which it revealed the results of the its research on “the state of education in higher education institutions.”
Students International Cooperation Public Union Chairman Elnur Mammedov said that within the framework of this research, which was started in October 2008, a large number of law violations were found. “We appealed to the Education Ministry and other relevant organs about this,” said Mammedov. “However their apathy shows that these agencies are informed about everything, but intentionally close their eyes to the situation. The Education Ministry has its own interests here. The ‘hotline’ that operates out of the ministry was created to deceive the public.”
Rustam Aliyev, a representative from the Education Ministry’s hotline, disagreed with Mammedov. He said, “Most of the appeals are anonymous and it is not possible to investigate these. In addition we only keep track of complaints that we receive and present them to people who are higher up.”
Students International Cooperation Public Union started the project “the state of education in higher education institutions” in October 2008 and completed the research on 5 February 2009. Within the framework of this project, negative instances were research and a number of measures were taken to try to eliminate these.
Students International Cooperation Public Union appealed to the Institute for Reporters’ Freedom and Safety to conduct its event in IRFS’s press center because it had no money to rent a hall and conduct the event elsewhere.
Previous Post

“SIMURG-M” TV CHANNEL ASKS FOR TIME TO PAY ITS DEBTS