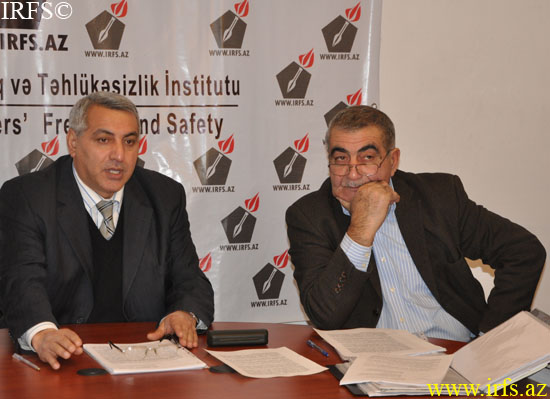 Today, 6 January, in the press center of the Institute for Reporters` Freedom and Safety, lawyers Vugar Khasayev and Elbrus Sarvarli conducted a press conference regarding lawsuits put forth against Ideal newspaper founder Nazim Guliyev.
Vugar Khasayev said that the lawsuits filed against Nazim Guliyev are unfounded and have no evidence.

“Instead of throwing out the case since no proof was found during the investigation, it was sent to the Grave Crimes Court,” said Khasayev. “Although Judge Azer Orujov should have thrown out the case and returned it to the prosecutor, he accepted the case for consideration, ended court investigation hurriedly and the prosecutor demanded for 15 year imprisonment for Nazim Guliyev.”

Elbrus Sarvarli said that N.Guliyev is innocent and the court shouldn’t sentence him. Elbrus Sarvarli added that Nazim Guliyev considers that the lawsuits put forth against him are politically motivated.

“Ideal” Newspaper Founder Nazim Guliyev was convicted on the basis of a lawsuit put forth under article 148 (insult) of the Criminal Code by "Azeri-Turk" Women's Union Chairperson Tanzila Rustamkhanli, and Sabira Mahmudova, and was sentenced to six month imprisonment on 20 May 2009. Later Nazim Guliyev was accused the Chief Prosecutor’s Office Department to Fight Against Corruption under articles 182.2.2 (to demand by using threats), 182.2.3 (when the demand by using threat is committed through violence), 182.3.2 (when committed to appropriate a large amount of property), 221.1(hooliganism), 234.1 (to illegally prepare, produce, obtain, keep, deliver, send and/or sell narcotics, psychotropic substances or their precursors) of Azerbaijan Criminal Code.