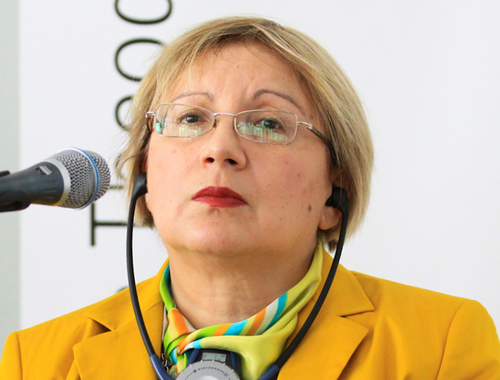 *  Leyla Yunus’ other lawyer Ramiz Mammadov said his client needed to be acquitted as she had not been proven guilty;

*  Rana Safaraliyeva’s representative asked that the court reject the appeal;

*  The public prosecutor said the verdict should be upheld as Leyla and Arif Yunus had been proven guilty.

On December 7, Baku Court of Appeal, chaired by the judge Vugar Mammadov, continued the hearing on the criminal case against the human rights defenders Leyla Yunus and Arif Yunus.

Leyla Yunus was put in a glass-encased cage and was almost entirely silent. Arif Yunus, however, sat next to his lawyers. The hearing was observed by local and international observes and journalists.

The judge first invited the defense counsels to make their case. Defense lawyer Elchin Sadigov argued that Leyla and Arif Yunus should be acquitted, as they had not been proven guilty. Sadigov requested that if the court does not acquit them, that their sentences at least be downgraded from jail terms.

The lawyer Ramiz Mammadov said in turn that Leyla Yunus’ right to the presumption of innocence and to defense have been violated.

“Regarding entrepreneurship, I want to underscore that NGO activity is not entrepreneurial. Moreover, “unregistered” activity gives rise to administrative responsibility. However, the investigating authorities have charged Leyla Yunus under Article 192 [of the Criminal Code], which is absurd. The tax evasion charge is completely groundless, too, because the Tax Code states that taxes on grants are calculated at a zero percent rate,” said the lawyer.

Ramiz Mammadov emphasized that when the Baku Grave Crimes Court passed a sentence on Leyla Yunus on charges of tax evasion and falsification of documents, the statute of limitations had been reached.

As the lawyer put it, there is no victim of the fraud charge, and the owners of the funds allocated under the grant agreements are the donors.

“The donors NED and German Marshall Fund signed grant agreements with Leyla Yunus, to support the publications of books on Islam. The Open Society Institute gave the grant to Matanat Azizova, and Leyla Yunus withdrew the funds from the bank based on power of attorney and gave them to Matanat Azizova, in other words, those funds have nothing to do with Leyla Yunus. The property used was not a property entrusted by the state or any organization. Furthermore, the donors say they do not have any complaints against Leyla and Arif Yunus. Therefore, I request that their acquittal.”

Shohrat Allahmanov, the legal representative of the Society of “Women for Peace and Democracy in the Caucasus” – headed by Rana Safaraliyeva who the court has recognized as a victim – requested that the verdict of the Grave Crimes Court be upheld.

The judge adjourned the hearing until December 10, 15.00, to give the lawyers time to prepare their speeches.