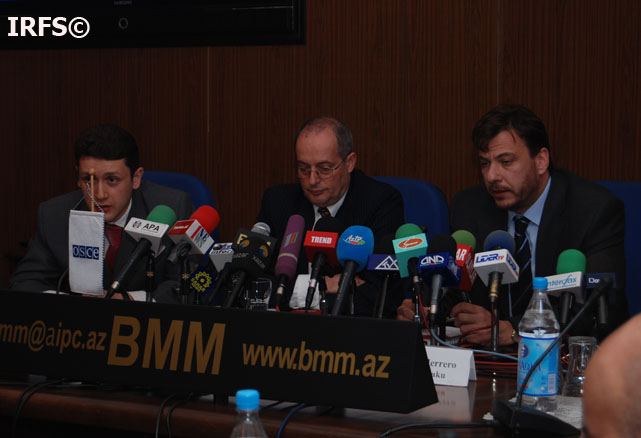 “I consider the situation of free media and the situation of the state media a situation that is creating serious trouble,” OSCE Special Representative on Media Freedom Miklos Haraszti stated during a press conference he conducted today on the results of his visit to Azerbaijan.

Haraszti stated that he has three calls regarding the area of media in Azerbaijan, “My first call is to the mass media, my second is to law enforcement agencies and my third to the Azerbaijani government.”   “During my visit in Azerbaijan I witnessed a shameful action against ‘Azadlig’ Newspaper journalist Agil Khalil. The same media didn’t deviate from broadcasting this propagandistic event and didn’t even create a situation for the opposite side to express his opinion. I call on TV channels that broadcast these to stop. There are a couple of reasons. First of all it is against law; second these kinds of things shouldn’t happen in countries where there is Rule of Law. Here inviolable personal rights of the journalist have been violated. Instead of conveying facts on order, there’s a need to check them before conveying.”  Haraszti said he met with Azerbaijan’s Chief Prosecutor Zakir Garalov and with Agil’s mother Khuraman Khalilova.  He said, “Garalov and I discussed these issues and about Elmar Huseynov’s murderers’ being at large. He said that the footage about Agil Khalil was broadcast with his agreement. We talked about these with the mother of the journalist. She told me how Chief Investigator of the Investigation Department Ali Guliyev put demands on Agil Khalil and how they said they would broadcast the shameful footage if Agil didn’t agree to the demands.” “My second call is to state law enforcement agencies. They accuse critical journalists of committing violations not related to journalism and imprison them. I call on the law enforcement agencies to stop this, to stop cooking up cases against journalists. In reality, their role is to protect journalists from violence and to help them. Whoever is responsible for this, I call for them to be punished. I asked Garalov to personally get involved in this. To solve these cooked up cases, and to investigate the three conditions put in front of Agil Khalilov and his parents, to restore the journalist’s inviolable rights, and to institute a case against that law enforcement agency.” “Third, I appeal to the government, I ask the president to release the imprisoned journalists. They are serving prison sentences that they don’t deserve. It is time to change the legislation. Criminal responsibility for journalists must be eliminated. I hope that Azerbaijan’s government will prevent this soon. These incidents negatively affect the state’s image. In my opinion Presidential Administration head Ramiz Mehdiyev and Minister of Foreign Affairs Elmar Mammedyarov met these ideas with agreement, but Mr. Garalov… not so much. During meetings with them we discussed this. The damages from these things could hurt the government.”