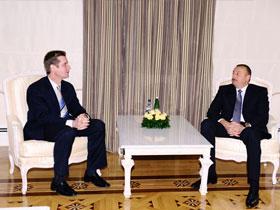 Former Deputy Assistant Secretary of US Matthew Bryza asked President Ilham Aliyev to release imprisoned bloggers Adnan Hajizade and Emin Milli (Abdullayev) during his meeting with the president.
Matthew Bryza reported this to “Turan” during a press conference held in Baku yesterday.
“We raised this issue when talking to the president and I think this problem should be solved within the defense of Azerbaijani citizens’ rights,” said M.Bryza. “And freedom of speech should be stimulated.”
Note that President Ilham Aliyev received Matthew Bryza because he finished his mission as OSCE Minsk Group’s American Co-chairman.
On 8 July, at approximately 8:00 p.m., Emin Milli and Adnan Hajizade were sitting at a table in “Lebonese” (Livan) restaurant along with several other young adults, when two people that looked like sportsmen came up to them, and attacked them causing physical injuries. Although they appealed to police as victims, police detained Adnan and Emin as suspected persons for 48 hours and freed the attackers. On 10 July, Sabail District Court Judge Rauf Ahmadov issued a decision under article 221.2.1 (hooliganism) of the Criminal Code to sentence Emin Milli and Adnan Hajizade to two months pre-trial detention. On July 20 the Appellate Court upheld the decision of the lower court. Both Emin Milli and Adnan Hajizade are being held in the Investigative Prison of Baku.
Photo ANS PRESS
Previous Post