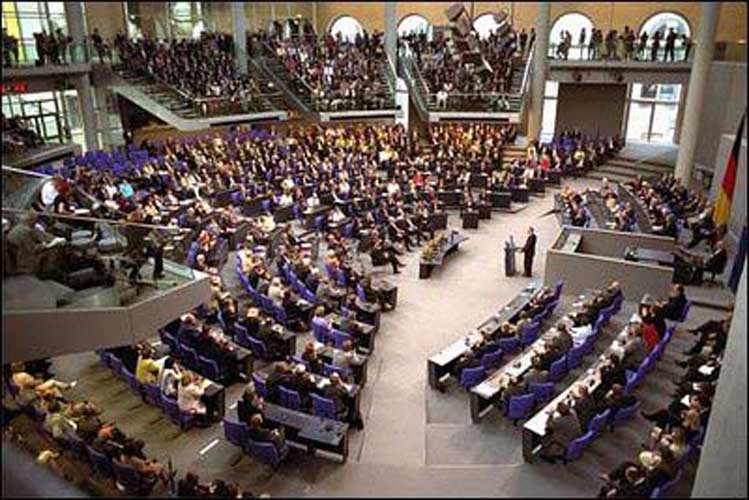 Member of Bundestag Germany’s Inter-Parliamentary Friendship Group on South Caucasus Schteffen Reikh and a group of representatives, who are visiting Azerbaijan, addressed an appeal to Milli Mejlis Chairman Ogtay Asadov in connection with imprisoned young bloggers – Emin Milli and Adnan Hajizade("Zerkalo").
In the letter they expressed concern about the arrest of young bloggers and regret about the increase of similar cases.
Saying that this kind of cases are damaging to Azerbaijan’s image, they stated in the letter that they want to visit Emin Milli and Adnan Hajizade.
In addition, on 11 August representatives of Belgium and Hungarian Embassies to Azerbaijan Peter Booms, Tibor Szilagiy, Zoltan Baj and Head of European Commission Representation Alan Waddams, and on 12 August US Embassy Counselor on political Issues Joan Ganso met with ombudsman Elmira Suleymanova and expressed concern about the arrest of Emin Milli and Adnan Hajizade.
On 8 July, at approximately 8:00 p.m., Emin Milli and Adnan Hajizade were sitting at a table in “Lebonese” (Livan) restaurant along with several other young adults, when two people that looked like sportsmen came up to them, and attacked them causing physical injuries. Although they appealed to police as victims, police detained Adnan and Emin as suspected persons for 48 hours and freed the attackers. On 10 July, Sabail District Court Judge Rauf Ahmadov issued a decision under article 221.2.1 (hooliganism) of the Criminal Code to sentence Emin Milli and Adnan Hajizade to two months pre-trial detention. On July 20 the Appellate Court upheld the decision of the lower court. Both Emin Milli and Adnan Hajizade are being held in the Investigative Prison of Baku.
Previous Post