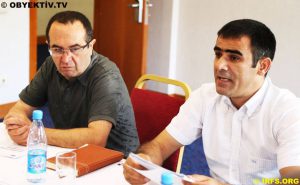 The Media Rights Institute (MRI) has presented the report on the findings from on-going monitoring of media freedom in Azerbaijan during the first half of 2013. “The situation in Azerbaijan regarding the freedom of media has not improved, on the contrary, some of the parameters are worsening” the report says.
The report covers the research in areas: “Situation of the access to public information”, “Lawsuits against media”, “Arrest of journalists, other criminal punishments and accusations”, “Physical and psychological pressures against media” and “TV and radio broadcasting”.

Project Manager of MRI Khalid Agaliyev noted that journalists are increasingly having troubles accessing information. Only 19 out of 50 information inquiries sent to different agencies were answered. In 20 cases journalists filed lawsuits over denial of access to information, but none of their suits were granted.

“The issue of online transparency of state agencies also causes discontent, which in average constitutes less than 25%. This means that they only post 25% of the information intended for public access on their websites. Information on the expenditure of budget resources and other financial activities doesn’t get disclosed as a rule” – said Rashad Hajili, director of the MRI.
“Prosecution of journalists and mass media outlets continues. Thirty six actions have been brought against the media, mainly Azadliq and Yeni Musavat newspapers, in the first half of the year, total amount of the required compensation being 2.6 million AZN. 720,000 AZN has been claimed from ten online publications” the report reads.

“The government has distorted the bill on protection from defamation. As such, the first version of the bill prepared with the participation of MRI experts envisaged decriminalization of defamation and trimming the amount of compensation for moral damages to the minimum. However both of these ideas were removed from the final version submitted to Venice Commission for review. There are seven arrested or charged journalists in the country. They include Khural newspaper editor Avaz Zeynalli, independent journalists Faramaz Allahverdiyev (Novruzoglu) and Fuad Huseynov, Tolishy Sado newspaper editor Hilal Mammadov, Yeni Musavat newspaper journalist Tofig Yagublu, azadxeber.org news website editor Nijat Aliyev, and xeber44.com news website editor Araz Guliyev” the report reads further.

“In addition, journalists Vugar Gonagov and Zaur Guliyev, also the founder of Gundam Khabar newspaper Shirin Jafari have been convicted. There is an open criminal case against the IRFS reporter Mehman Huseynov. Bloggers Rashad Ramazanov and Ilkin Rustamzade have been arrested.”
The report laid out recommendations for the solution of the existing problems: removing restrictions on access to information; increasing transparency of state agencies; abolishing the criminal defamation; applying the precedents of the European Court; releasing the journalists arrested on questionable charges; investigating the physical attacks on journalists, etc.