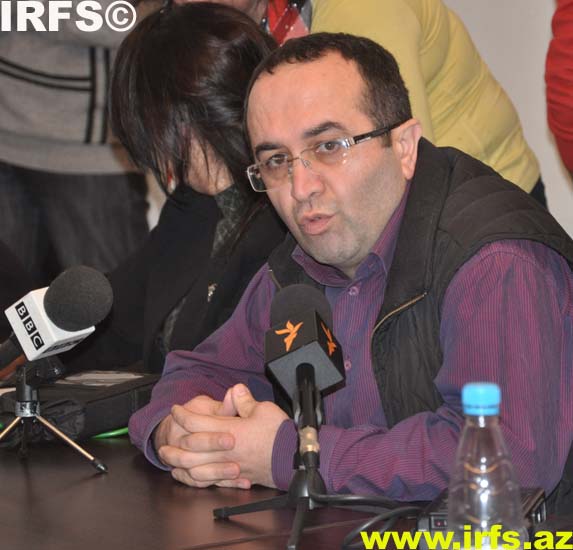 Today (23 December), at the IRFS press center, the Media Rights Institute released report on findings related to freedom of expression in Azerbaijan.
Media Rights Institute Director Rashid Hajili said that the report deals with pressure against media representatives and journalists, as well as with conclusions on the current freedom of expression situation in Azerbaijan.
Media Rights Institute program coordinator Khalid Agaliyev was grateful to USAID and IREX for their support in the investigation and preparation of the report, and to the British Embassy and OSCE Baku Office for their help in monitoring the internet situation.

Khalid Agaliyev noted that he thought that the report would be discussed in a more positive atmosphere after the release of former political prisoner Eynulla Fatullayev. However, the recent death of Rafig Tagi death and imprisonment of two additional journalists has dampened the mood in the media community.
Khalid Agaliyev said that pressure, threats, and assaults against journalists have increased during the last 2-3 years. About 72 journalists have been physically or psychologically assaulted during this time period. Around 32 lawsuits against the journalists were filed for defamation and insult, and jail time was demanded for 8 journalists based on their professional work.
Media Rights Institute representative, Khalid Agaliyev, said that many defamation lawsuits were pursued against Azadlig, Yeni Musavat, Khural newspapers. All together the prosecution called for over two and a half million AZN in compensation, though only 46 000 AZN out of this sum was ordered to be paid by the courts.
Lawsuits and complaints against the journalists were mainly filed by representatives of governmental organizations.
Participants pointed out that the government controls all 29 internet providers,  that provision of internet in the regions remains poor, and that there is a monopoly over third generation communication technologies (3G).
Participants also said that serious shortcomings in the regulation of television and radio broadcasters have not been eliminated this year, noting that substantial preparatory works were not carried out to transition to digital broadcasting in Azerbaijan.
Media Rights Institute Director Rashid Hajili noted that a law decriminalizing defamation has not yet been adopted.
He pointed to the specific case of Khural newspaper as an example of restrictions against freedom of speech.
Journalist Shahveled Chobanoglu stressed that this year is the year of bans, saying that it is important to assess the legality of the work of the Press Council.