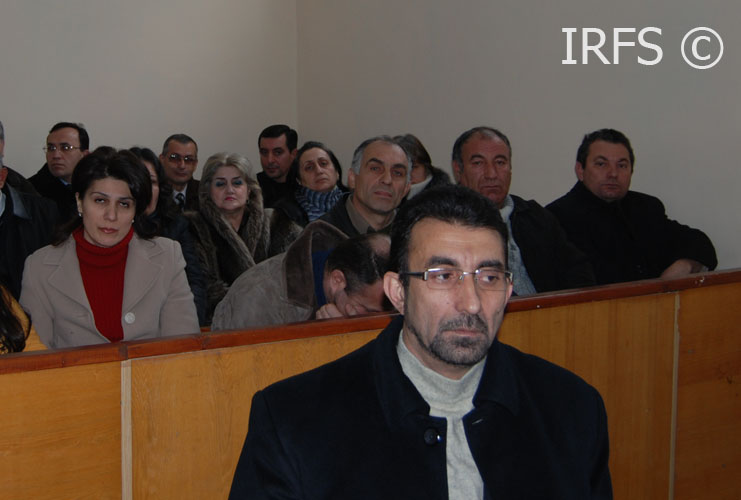 Today in the Yasamal District Court a hearing on "Azadlig" Newspaper Editor-in-Chief Ganimat Zahid's case was conducted under the chairmanship of Judge Sudaba Mammadova.
The hearing opened with several petitions put forth by Elchin Sadigov, one of Ganimat Zahidov's lawyers.
Sadigov stated that there's a tape showing witnesses were subjected to pressure and threats when they were questioned. The lawyer requested that this tape be added to the case material, and said, “And if it is necessary we can listen to it ourselves in court." Judge Mammadova denied the petition, saying such things were not part of a trial.
Sadigov's second petition was about two witnesses who refuse to come to court. He said they should be forced to come. The judge denied this petition as well.
A third petition was about inviting the relatives of Sevgilada Gulizade to court to testify. Sadigov justified this, saying, "This person was wanted for theft before.” The state prosecutor protested against this petition, as he did against all others, and asked the judge not to support it.. The judge did not fulfill this petition either.
Then medical experts (Allahyarov Nuru – who examined G.Zahid, Allahverdiyev Jeyhun – who examined Vusal Hasanov, and Abbasov Fakhraddin who examined both of them) were called to testify as witnesses. Defense lawyers Elchin Sadigov and Osman Kazimov asked the experts questions about Zahid and Hasanov's examinations. The experts answered the questions in almost exactly the same way. Allahyarov Nuru said that he noticed swelling on the right side of Ganimat's head and a bruise on his arm.
Defense lawyer Elchin Sadigov then asked him, "Why isn't this reflected in your official report?" The doctor deviated from the question. Lawyer Osman Kazimov asked the doctor this question, "What kind of medicine is used to treat fractures?" To this the doctor answered, "Medicine that possesses calcium." Osmanov asked the doctor to name some calcium possessing medicines. After the doctor named some medicines, Osmanov said, "But in the document showing the names of the medicines Hasanov was treated with, we see only Demerol, analgin and glucose. Fractures are not treated with these medicines."
After a break, video-recordings reflecting Zahid's examination, the joint interrogation of Zahid with Vusal Hasanov, and the joint interrogation of Sevgilada Guliyeva and Zahid were shown. Sevgilada Guliyeva used bad language during the interrogation, and due to this the recording was only partially shown. In the recording of the interrogation of G. Zahidov and V. Hasanov, it could clearly be seen that Hasanov didn't have any injuries on his face. The rest of this video-recording will be watched during the next hearing on this case, which is scheduled for 19 February at 11a.m.

RAFIG TAGI WANTS HIS JOB AS A PHYSICIAN BACK