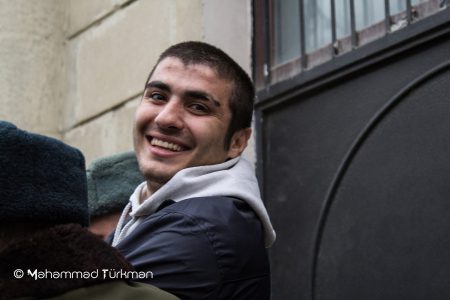 Baku Court of Appeal held a hearing on Mehman Huseynov’s appeal. Judge Aflatun Gasimov presided over the hearing. Members of the local public and representatives from the US, Norway and the EU attended the proceedings.

At the beginning of the session, Huseynov’s lawyers requested time to consult with their client. The judge granted the request and announced a 15-minute break.

After the break, the judge asked whether Huseynov was ready to give a statement.
However, lawyer Fuad Agayev stepped in and requested that the blogger be given time to prepare for his statement.
The judge granted the motion and postponed the hearing until 16 November, 3.30 pm.

Background: On 3 March 2017, Surakhani District Court convicted Mehman Huseynov of defamation (Article 147 of the Criminal Code) and sentenced him to 2 years in prison. Huseynov’s initial appeal against his conviction was rejected. Later, the Supreme Court partially granted Huseynov’s appeal and sent his case back to the Court of Appeal for reconsideration.