MICLOS HARASZTI HOLDS PRESS CONFERENCE REGARDING RESULTS OF HIS VISIT 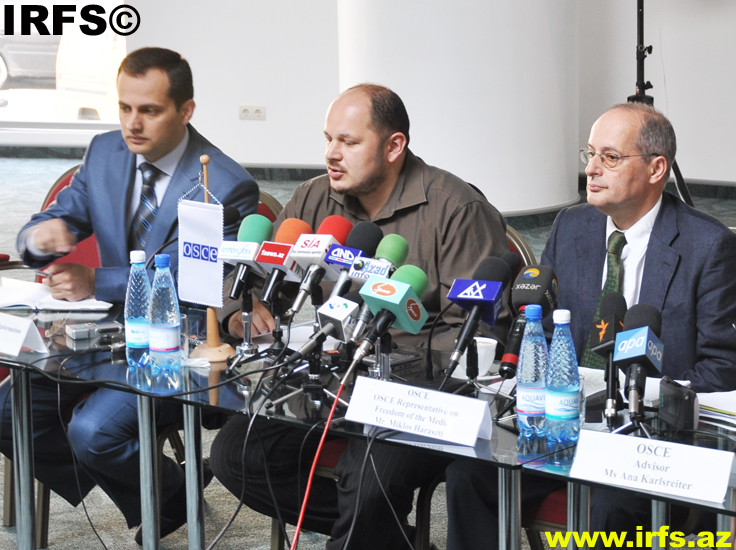 Today, 10 September, OSCE Representative on Freedom of the Media Miklos Haraszti held a press conference in connection with the results of his three day visit.
M.Haraszti told journalists that he met with Azerbaijan’s media representatives, and visited imprisoned journalists  “Azadlig” Newspaper Editor-in-chief Ganimat Zahid and “ Gundalik Azerbaijan” and “Realniy Azerbaijan” Newspapers’ Editor-in-chief Eynulla Fatullayev within the framework of his visit. He added that although he wanted to visit imprisoned young bloggers Emin Milli and Adnan Hajizade, he was not permitted legally.
“We discussed issues regarding journalists and young bloggers with Presidential Administration Socio-political Department Head Ali Hasanov, Deputy Foreign Affairs Minister Mahmud Mammadguliyev and Ombudsman Elmira Suleymanova. Ali Hasanov said that he shares the concern about the arrest of the young bloggers and he hopes that they will not be imprisoned in court,” said M.Haraszti adding that they talked about decriminalizing defamation and insult articles of the Criminal Code that consider criminal responsibility. Ali Hasanov said that they are working on these issues.
OSCE Representative emphasized that they talked about the closure of foreign radio stations’ broadcasts via FM frequencies, the arrest of journalists who write critical articles by law enforcement organs, and other media problems and said that he hopes that there will be improvements in these areas.