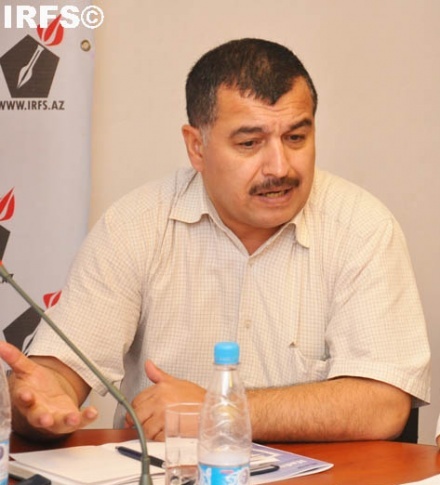 Yesterday, 30 July, at evening hours, well-known military journalist and military expert Uzeyir Jafarov was called to the Investigative Department on Grave Crimes of the Chief Prosecutor’s Office in connection with the murder of general Rail Rzayev. The Institute for Reporters’ Freedom and Safety was told this by U.Jafarov.
“In the Chief Prosecutor’s Office, the Investigator on Important Cases Vagif Ismayilov was concerned about my talks before and after the murder of the general and asked me questions about whom I talked to about the murder, whom I called and who called on that day in connection with this,” said U.Jafarov.
During the interrogation Jafarov has not been subjected to any physical and moral pressure and a protocol was composed on the interrogation, and was asked his opinion about possible versions of the murder and its reasons, emphasized the journalist.

Deputy Defense Minister, Commander of Air Forces and Defense from Air Attack, General-Lieutenant Rail Rzayev was shot to death on 11 February in Baku, and the murder has not been solved yet.