MOST LAWSUITS AGAINST JOURNALISTS FILED BY GOVERNMENT OFFICIALS 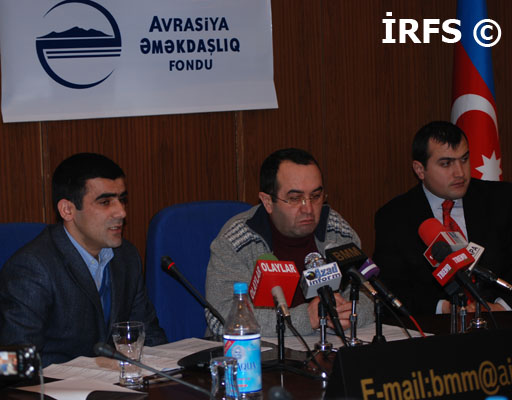 "Eighty-one out of 103 lawsuits against media were filed by government officials in 2007.
This shows that journalists writing about the activity of governmental organizations are sued the most," Head of the Media Rights Institute (MRI) Rashid Hajili said today during a roundtable. The roundtable was organized by MRI within the framework of the "Monitoring, Analysis of Legal Environment for Free and Independent Media, and Public Discussions" Project.
It was noted that the number of accusations made against journalists on defamation charges is on the rise. The number of court trials was 14 in 2005 for the opposition media. But this number is increased to 103 in 2007. In addition, six claims have already been filed in January 2008. It was said that two draft laws (on defamation and on protecting the confidentiality of journalist sources) to prevent these tendencies, and some offers on the regulation of TV-radio field have been prepared.
"Turan" Information Agency Director Mehman Aliyev said, "In Azerbaijan a campaign is carried out against the independent media and the opposition media. And the aim of this campaign is to destroy the media completely. That is why the number of accusations is not surprising." Aliyev stressed that after censorship was abolished in 1998 in the country a plan was hatched to destroy the economical support basis of the media. "The reduction of advertisements in media in 2007 is an indication that the government hasn't abandoned its aims," he added.
Lawyer Alasgar Mammadli said, "In 2007 the amount of court fines for the Mass Media exceeded the amount of Mass Media advertisements. This demonstrates a divergence from European values."
The Director of the Institute for Reporters' Freedom and Safety Emin Huseynov said, "A protection law should be prepared for journalists, in which journalists are endowed with certain rights and authority. The imprisoned journalists have been arrested as a result of provocation committed by law enforcement organs. Narcotics were planted in Sakit Zahidov's pocket, Ganimat Zahidov was falsely accused of committing hooliganism, and we clearly saw that Mushfig Huseynov was entrapped. There is a particular law about police and prosecutors. It would be wise to adopt a law about journalists as well."