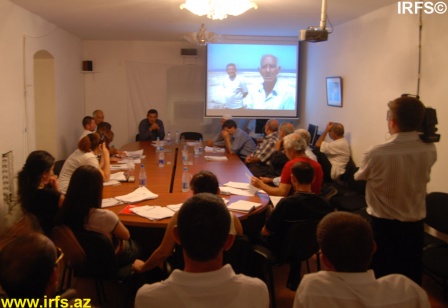 Today (12 September) a group of Nardaran village residents held a press conference in the press center of the Institute for Reporters’ Freedom and Safety about land they allege was illegally seized.

The authorized representative of the residents, Rasim Alizade, stated that their "ancestral" property has been illegally seized by Nigar Nazarova, former U.S. Ambassador to Azerbaijan Stanley Escudero's daughter-in-law Nigar Nazarova. According to Alizade, he appealed to relevant organizations regarding this with no result. “Turan” Information Agency, “Bizim Yol”, “Yeni Musavat”, “Baki Khabar” and “Zerkalo” Newspapers participated in the press conference.

Although village residents appealed to several press centers, no one created conditions for them, except “Gundalik Baki” Newspaper.