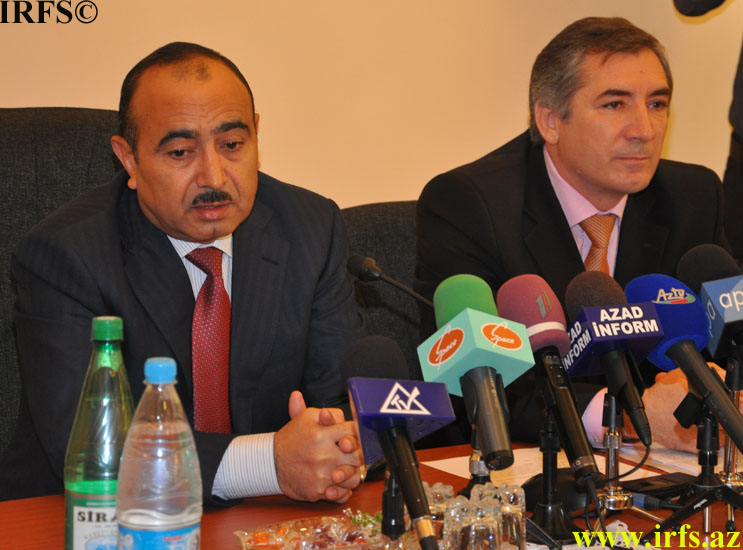 Today, 21 April, in the National TV and Radio Council (NTRC), a conference was held on the theme of “Electronic media: state regulation and public supervision.”
NTRC chairman Nushiravan Meherremov said that the main goal to hold the event is to discuss the situation in the TV radio sector and public supervision issues. Meherremov stressed that there are certain problems related to the regulation of TV radio sector, and these problems show themselves in the increased numbers of show programs and programs concerning family issues in addition to the low level of professionalism of TV moderators. Meherremov spoke about the importance of the state regulation over Internet TV and radios. Press Council Chairman Aflatun Amashov said that he also supports the state regulation.
Azerbaijan Internet Forum President Osman Gunduz expressed his opinion about the statements of Communication and Information Technologies Minister Ali Abbasov and NTRC chairman regarding the importance of licensing Internet televisions. AIF President stressed that licensing internet televisions will play a restrictive role and will damage the country’s image; this step is not supported by local and international communities. He added that there are problems associated with licensing and frequency in the TV and radio broadcasting sector. Also the number of regional televisions is fewer and there are not regional radios at all.
Presidental Administration Socio-Political Department Chief Ali Hasanov expressed his position on O.Gunduz’s opinions and said that he was against talking about problems that do not exist, and that the problem regarding licensing TV and radios are not being discussed yet. Hasanov noted that there is not a restriction regarding regional TV and radios and people who want to open radio and televisions have opportunity to appeal.
MP Fazil Mustafa said that it is important to conduct debates on the TV channels to deliver the opinions of people belonging to different political parties of the society.
*The event was planned to continue from 11.00 a.m. till 1.00 p.m., according to the official website of the NTRC. However it was over at noon. Consequently, the representatives of IREX-Azerbaijan and IRFS who wanted to express their opinions about these issues did not have opportunity to speak and voice their opinions.