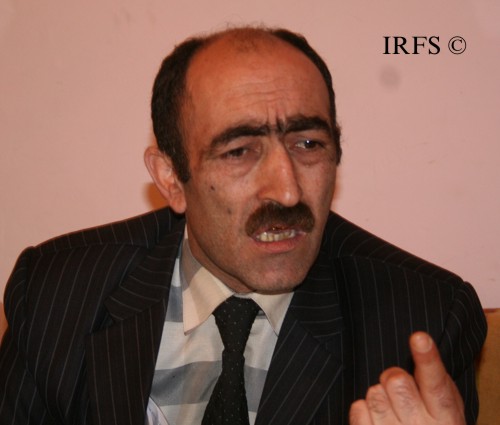 Today, 22 July, in the Nizami District Court, under the chairmanship of Ziya Aliyev, a hearing took place on the special lawsuit of “Azadlig Harakatchilari” Union Chairman Tahmasib Novruzov to defend his honor and dignity against “Nota” Newspaper Editor-in-Chief Substitute Sardar Alibeyli (Aliyev) under Article 148 (insult), and against “Nota” Newspaper employees Ramiz Tagiyev and Faramaz Novruzoglu (Allahverdiyev) under Article 147.2 (accusing someone of grave crimes or especially grave crimes). A verdict was issued during today’s hearing.
Judge Z.Aliyev issued a verdict to sentence Sardar Alibeyli and Faramaz Allahverdiyev to three months imprisonment and Ramiz Tagiyev to six months conditional imprisonment. R.Tagiyev has to pay 10 % of his monthly salary. S.Alibeyli and F.Allahverdiyev are still free. They will file an appeal against this decision. If their appeal is not fulfilled, the verdict will be fulfilled, and both of the journalists will be imprisoned.
S.Alibeyli told IRFS that they will file an appeal in the Appellate Court as soon as they receive the verdict.

Due to articles “Whose orders is Tahmasib Novruzov fulfilling” (1-7 February, 2009, edition 04 (018), “Anti-Terror Center threatens our citizens” (8-14 February, edition 05 (019), “Who is NSM’s person in APA”, “Bahlul Muradova raises one more criminal case” (22-28 February, 2009, edition 07 (021), “Let your mother die, hey Ramazan” (01-07 March, edition 08 (022), and “Who are forces that want the name of Sevil Nuriyeva to be mentioned in our newspaper” (08-14 March, 2009, edition 09 (023) published in “Nota” Newspaper. On 31 March, in the Khatai District Court, Judge Togrul Aliyev adopted a decision for “Nota” Newspaper to publish a refutation about the articles and apologize. T.Novruzov filed a special lawsuit again under articles 147.2 and 148 of the Criminal Code due to the article “Apology article for Tahmasib Novruzov whose honor is stepped on and whose dignity is degraded,” which was published in the April 05-11 2009 edition of the newspaper. In June the case was sent to the Nizami District Court to be considered.