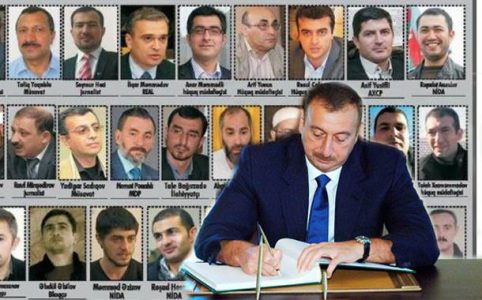 Ganimat Zahid’s nephew Rufat Zahidov and his cousin Rovshan Zahidov were convicted of trafficking of a lot of drugs and sentenced to 6 years in jail by Baku Grave Crimes Court’s judgment on 28 June 2016. Ganimat Zahid regarded his relatives’ arrest as retaliation against him. In particular, he has associated this incident with his strong criticism of the government on his Azerbaijani Hour TV program broadcast via satellite. In the course of their appeal proceedings, Rufat and Rovshan Zahidov publicly severed their ties of kinship with Ganimat Zahid. On 14 March, Sumgayit Court of Appeal reduced their sentences by one year.

Abdul Abilov, the admin of the critical Facebook page Stop Sycophants, was also charged with drug trafficking and sentenced to 5.5 years in prison on 27 May 2014.

APFP activist Elvin Abdullayev was imprisoned for 6 years on the same charges on 1 June 2015.

Germany-based exiled blogger, Meydan TV director Emin Milli’s brother-in-law Nazim Agabayov has been exempted from his suspended sentence under the pardon decree. Agabayov was handed a 2-year suspended sentence after the charges against him were re-classified by the court from Article 234.4.3 (drug trafficking) of the Criminal Code to Article 234.1 (illegal drug possession without the purpose of selling) at the time of sentencing.

Jafar Jafarov and Sakhavat Samadov, individuals jailed under Shaki Grave Crimes Court’s judgment of 17 March 2014 on the accusation of participating in protests against local authorities in Ismayilli in January 2013, have also been freed under the pardon.

The decree applied to a total of 423 individuals.

Human rights defenders have assessed the pardon decree as incomplete and expressed their objections over its failure to apply to more than one hundred political prisoners.