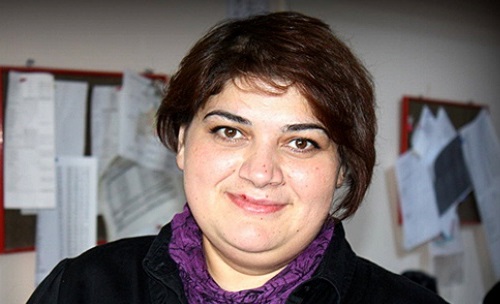 Khadija Ismayil made a speech at the hearing and asked for the appeal to be granted. “The Supreme Court decision dated 25 May 2016 converted my sentence into a conditional one and ordered me not to change my place of residence without warning. However, a bailiff of Binagadi District Department for Execution of Judgments has acted in excess of his powers and imposed a ban on my travelling out of the country by applying to the State Border Service. Supreme Court could have done this itself if this was deemed necessary. But the decision does not provide for this. Hence, the bailiff has acted arbitrarily,” Khadija Ismayil said.

“I have twice appealed to the court to lift the ban, but Binagadi District Court granted neither of my appeals. Due to the obstacle to my departure from the country, I am unable to participate in foreign events and conferences related to my profession and the socio-political life of the country. Therefore, I am forced to join events over the internet, which they also try to hinder. I join events via the internet as long as there is not a complete barrier to internet access like in North Korea. The fact that I cannot leave the country is a violation of my freedom of movement. This is a serious illegality. I am serving a conditional sentence on the condition that if I once again commit a crime while at liberty, the unserved 9-month remainder of the sentence will be added up. The absurdity of the Supreme Court decision is that I have actually been serving a sentence for 5 years because I am unable to leave the country whenever I want. This is a sentence per se. I suffer not just from an inability to attend events, I have to communicate with bailiffs once a month. What are you trying to deprive me of? Today is the internet era. I can contact anyone over the internet and communicate with them in any form. When I join an event via the internet, they say of me that I am in a prison country, It is a shame. After all, a country is not the same thing as a prison. Why should the country be closed for dissidents? I hope you will not carry on with the unlawfulness of other courts and will put an end to it,” the journalist concluded.

Public prosecutor Orkhan Damirli requested that the appeal be dismissed and the decision dated 12 December 2016 of Baku Court of Appeal be upheld.

The court announced the decision after a 2-minute deliberation. According to the decision, the appeal was not granted and Baku Appeal Court’s decision of 12 December 2016 was upheld.

Recall that, earlier the journalist had appealed to Binagadi District Court to lift the ban prohibiting her from leaving the country during the probation period related to her conditional sentencing. However, the court denied her appeal on 24 October 2016. Baku Court of Appeal upheld the first instance court’s decision on 12 December 2016. The Supreme Court appeal was filed against this latter decision.

Background: Khadija Ismayil was arrested on 5 December 2014, and was charged under Article 125 of the Criminal Code (inciting to suicide). She was suspected of driving journalist Tural Mustafayev to suicide and was ordered detained. Later, Khadija Ismayil faced additional charges under Articles 179.3.2 (misappropriation or squandering, in a large amount), 192.2.2 (illegal entrepreneurship), 213.1 (tax evasion) and 308.2 (abuse of authority). Although acquitted of the ‘driving to suicide’ charge afterwards, the journalist was convicted of the other charges and was sentenced to 7 years 5 months under Baku Grave Crimes Court’s verdict. Following an appeal by Khadija Ismayil, the Supreme Court replaced her jail sentence with a conditional sentence of 3 years 6 months, and she was released. Khadija Ismayil was subsequently acquitted

of the charges under Articles 179 and 308 of the Criminal Code, and the court reduced her conditional sentence from 3.5 years to 2 years 3 months.

Khadija Ismayil does not accept the charges and has declared that she was arrested for political reasons related to her journalistic activities.