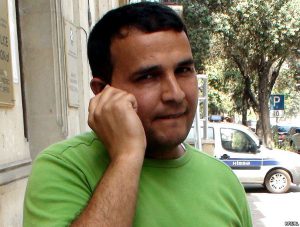 Natig Gulahmadoglu (Adilov), a journalist with Azadlig newspaper and Media TV and the press attaché  of opposition Popular Front partybelieves arrest of his relatives Murad Adilov(brother) and Sabuhi Nadirov (cousin) relates to his journalistic and political activity. Residents of Sabirabad (a small provincial town in the Southern Azerbaijan) Adilov and Nadirov were both arrested on February 27.

According to chief of Sabirabad District Police Department Mubariz Guliyev the two men were arrested for illegal drug trafficking.

However Gulahmadoglu says the arrest is just another method of pressure. In his interview to IRFS Gulahmadoglu said no one can stop him from doing his work. Gulamadoglu, who reports for Azadlig newspaper and Media TV’s, and at the same time is the press attaché of opposition Popular Front party, said: “I always criticize the government via Azadliq newspaper and Azerbaijan Saati program. That’s why the government arrested my relatives.

However chief of Sabirabad District Police Department Mubariz Guliyev told the press that the two men were arrested for illegal drug trafficking.

Hilal Mammadov and his supporters protest against unfair trial