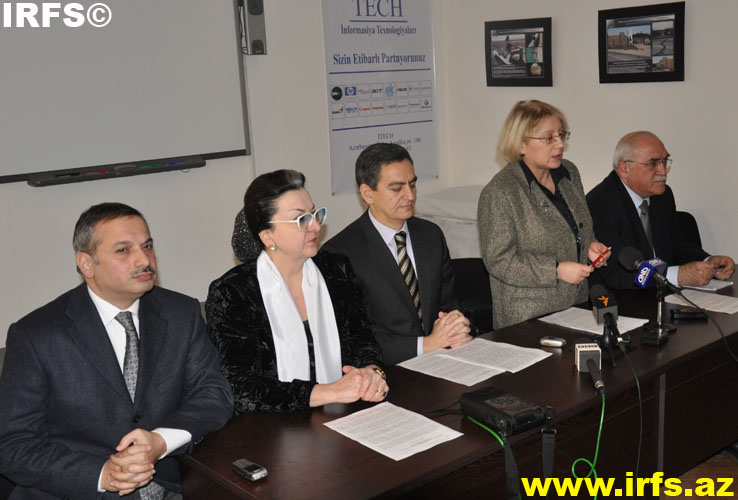 Today, 26 January, in Azerbaijan Media Center, "For the Sake of Garabagh and the Republic Movement" conducted an event against Constitutional changes that could be approved in the upcoming referendum. The movement considers that the proposed changes, on which a referendum will be held, are contradictory to at least 20 articles of the Constitution.
APFP Chairman Ali Karimli said that “Republicans” and “For the Sake Garabagh and the Republic Movement” Initiative Groups continue signature gathering campaign despite of all kind of pressure. Karimli added that there has never been violation against citizens to this extent as there’s at the eve of the referendum.

“Today five journalists are in prison. Repression persists against people who are active in socio-political arena,” said Liberal Party Leader Lala Shovkat Hajiyeva. “Lawsuits against ’21st Century Education Center’ Public Union Chairman Etibar Aliyev and Head of the Institute for Peace and Democracy Leyla Yunus, and the imprisonment of the son of well-known social public figure Zardusht Alizade, who was accused of possession of narcotics, are organized movement to silence active social forces that hold principal and consecutive position to protect democratic values.” Then Hajiyeva emphasized that it is necessary to appeal to international organizations in connection with this issue.

Citizens and Development Party Chairman Ali Aliyev said that citizens who signed signature papers have begun to send telegrams to the Central Election Commission saying that the signatures were obtained while they were under pressure from police. Therefore, about 100 signatures are considered void.

On 18 March, a referendum will be conducted in Azerbaijan. Within the framework of the referendum, changes have been proposed to more than 20 articles of the Republic of Azerbaijan's Constitution. Some of the changes proposed could severely limit freedom of information and the press.

EVENT CONDUCTED BY “FOR GARABAGH AND REPUBLIC” CIVIL MOVEMENT AGAINST REFERENDUM – 26.01.2009