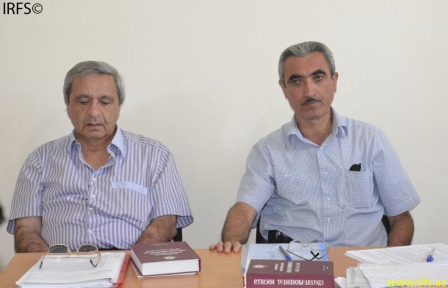 Today, the Binagadi District Court heard a lawsuit filed by Bar of Lawyers for the dismissal of lawyer Osman Kazimov from the Bar, Kazimov’s cross-lawsuit against the Bar, and another lawsuit filed by a third person with an independent claim. The Judge Huseyn Safarov presided over the hearing.
The plaintiff’s representative presented the decision of the Bar of Lawyers’ Board to court.
Lawyer Osman Kazimov provided the court with a copy of the telegram he sent to General Prosecutor’s Office while he has been in Fuzuli.
Then another plaintiff’s representative Feruz Guliyev filed a motion requesting interrogation of the members of the Bar of Lawyers’ Board and office secretary in the court.
The judge said that there is no need to question office secretary in the court and if needed, he can be invited to the court later.
Then, representative of plaintiff Altay Muradov submitted his objection against cross-lawsuit filed by Osman Kazimov to court and explained.
Muradov said that the cross-lawsuit filed by Kazimov restricts the right of Bar of Lawyers to appeal to court and evidences submitted by plaintiffs are groundless as well.
Representative of plaintiffs Feruz Guliyev said that there is no need to create a precedent by taking such step. He also said that Osman Kazimov can not be expelled from the Bar of Lawyers until his fault is proven.
Then the Judge offered the parties to reach an agreement of truce and scheduled the next hearing for 13 July, 2011.
BACKGROUND
At a meeting on February 4th held by the Board of the Bar of Lawyers, a decision was issued to stop Osman Kazimov`s work as a lawyer and to appeal to court for expulsion from the Bar of Lawyers. The Bar of lawyers issued this decision on the basis of the petition filed by First Deputy General Prosecutor Rustam Usubov. The Prosecutor's office charged Osman Kazimov with violation of Criminal Procedure Code and the law on Lawyer Activity.
Previous Post