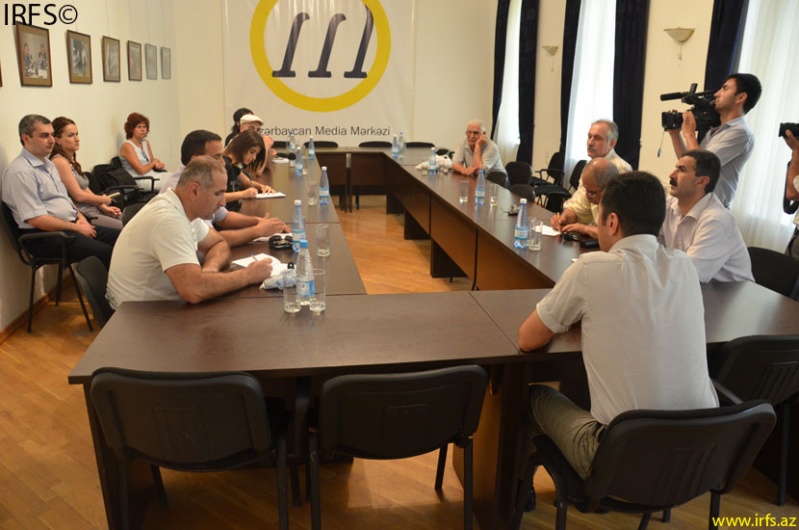 Public discusion of Azadlig daily correspondent Natig Gulahmadoglu’s article titled “Corruption tracks unveiled by the Kur” was held today. The discussion was organized within the framework of “Media as fourth power” project financed by the US Embassy in Azerbaijan.
The journalist Gulahmadoglu has investigated the problematic situation caused by floods in the central lowlands in 2009. Having visited 5 villages of Sabirabad region, where he talked to residents, the journalist unveiled serious corruption facts in flood recovery.
It was revealed that the authorities have kept confidential the reports regarding the flood recovery. The population has not been provided with compensation for the material and financial losses they suffered. There are residents with flood-destroyed houses who have not been provided yet with new houses so far.
The residents say to not trust the operation of any agency except the Kur Civil Society Organization. Finally, the journalist said that there are serious facts about misappropriation of funds allotted for flood recovery in Sabirabad.
Kur Civil Society Organization member Mehman Aliyev said that they will furthermore enhance the scale of activities to restore the rights of flood victims. Aliyev expressed surprise with recent allocation of another 6 million AZN for the flood recovery, as 300 million AZN had been allocated earlier.
Sabirabad residents have sued the Cabinet of Ministers and the Ministry of Emergency Situations for several legal violations they committed. It was noted that this issue will be taken to the European Court of Human Rights if necessary.
Previous Post

HEARING ON NEWSPAPER’S LAWSUIT AGAINST BANK