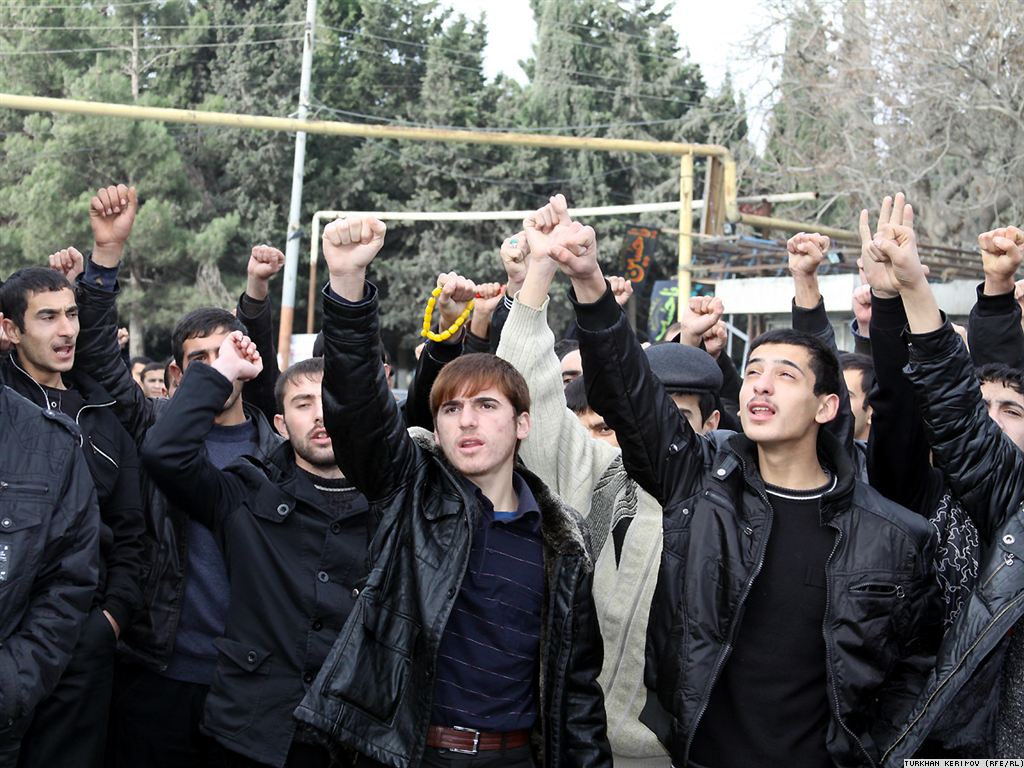 On November 26, fatal clashes broke out between the police and believers. Two police officers and four civilians died in the incident. Sabunchu District Police Office confirmed that a special operation was conducted in Nardaran settlement, during which several people were detained. Taleh Bagirzade, the leader of the Muslim Union Movement, and several believers were detained by officers of and taken to an unknown place. The religious people were detained while performing namaz (prayer) near the Rahima Khanim sanctuary in Nardaran.

Shots were heard during the operation and the wounded were taken to Clinical Hospital #3 of Baku. The hospital confirmed that two of these people had died and that others are wounded. Hospital #3 is surrounded by police officers.

The car of Azad Azerbaycan Television (ATV) was attacked by several men while the filming crew was trying to cover the shootout and its aftermath. ATV journalist Vagif Aydinoglu also was assaulted. The assailants stoned the car and physically assaulted the driver.

Another group tried to attack the car belong to Report Information Agency, but the journalists managed to drive away.

The cameraman of the Ichtimai Television also claims that members of the Muslim community assaulted him and smashed his camera.

The Prosecutor General’s Office and Ministry of Internal Affairs issued a joint statement in connection with the incident:

“The Ministry of Internal Affairs received information about an armed criminal gang operating under the pretext of religion, planning to violate socio-political stability in the country and commit provocations, mass riots and acts of terrorism. The information was confirmed by an investigation, and necessitated urgent counter-measures. It was determined that Taleh Kamil oglu Bagirov, Elman Seydamir oglu Agayev, Zulfugar Sadraddin oglu Mikayilov and Abulfaz Heydat oglu Bunyatov have established a movement named “Muslim Union” with the aim to forcefully changing the constitutional system of government and establishing a religious state governed by Sharia law. The above-mentioned people have gathered supporters from Baku city and other regions of the country and organized a criminal gang by providing them with different types of fire-arms, ammunition, explosives and devices. Furthermore, they have held illegal meetings in the Nardaran settlement of Baku, discussed ways of encouraging people to rebel against the government, gave instructions to their supporters in this regard, and distributed leaflets. The specific duties of each member of the armed criminal gang, including the individuals responsible for the acts of terrorism planned against government representatives, have been determined.”

“On November 26, 2015, the Ministry of National Affairs conducted a special operation in Nardaran settlement of Baku. During the operation, officers encountered armed resistance, shots were fired from automatic rifles and hand grenades were thrown. In response to continuous fire from the attackers, the special operation group killed four members of the criminal gang and wounded several others using their duty weapons. Despite the increasing number of supporters of the armed criminal gang in the operation area, the police officers bravely carried out their duties till the end, and two officers died heroically.”

A large number of automatic rifles, hand grenades, white arm etc., were seized as material evidence, and fourteen members of the criminal gang, including Taleh Bagirov, were detained and surrendered to the investigating authority, the statement reads.

A criminal case has been launched and is under investigation by the Prosecutor General’s Office.