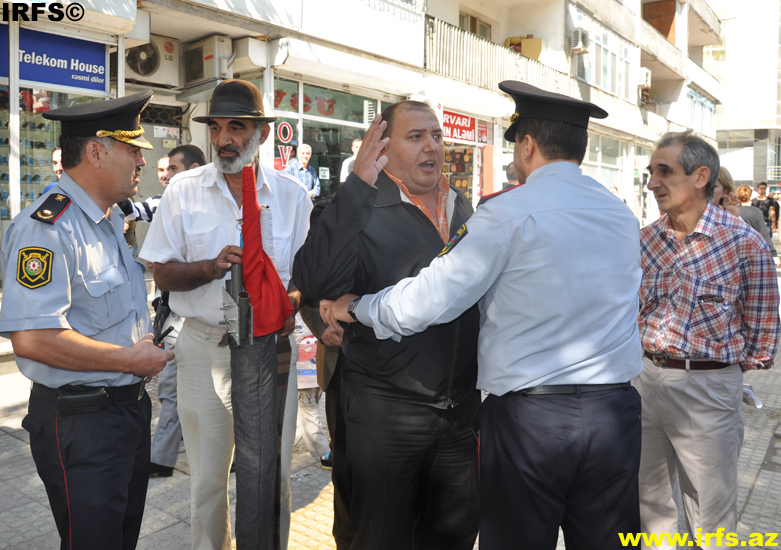 Today, 24 September, a group of activists of Union for Democracy and Garabagh Freedom Organization attempted to hold a unsanctioned protest action in front of the Foreign Affairs Ministry.
Police blocked the way of the action participants advancing from the front of “Nizami” metro station to the Foreign Affairs Ministry and forcefully took one of the participants, Elman Turkoglu, away in a car.
Union for Democracy representative and picket coordinator Khazar Teyyublu said that although they sent a letter to the Baku City Executive Administration to get permission to hold the action, they were not given permission.
Deputy Panah Huseyn and a Police employee had a dispute during the picket. After a short communication, they were allowed to submit the picket resolution to the Foreign Affairs Ministry. It is demanded in the resolution that Azerbaijan’s government should reject negotiations on the basis of Madrid Principles. At the same time, they objected to the opening of borders between Armenia and Turkey.
Panah Huseyn told journalists that the picket participants who protested to the solution of Garabag problem on the basis of Madrid principles consider that steps should be taken to free our occupied lands.
At the end of the picket, Elman Turkoglu who, was detained by police, was released after he was removed from the area.