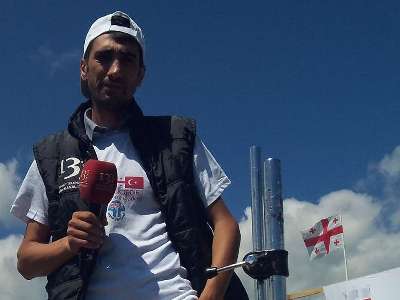 Police officers have visited the houses of Teymur Karimov, a journalist with Kanal13 TV who is currently residing in a foreign country. The journalist’s houses are located in Baku and the Tar-Tar region. As there was nobody in the house in Baku, officers of the Tar-Tar Regional Police Department visited his father’s home. They asked about the journalist’s spouse’s and children’s names, and also mentioned the names of Teymur’s married sister and her husband. The police officers warned that if Karimov continued with his activity and comments on Facebook, “it won’t end well for” his relatives. A day before this incident, Teymur Karimov’s maternal uncle Yashar Mammadov received a call from a deputy head of Kalbajar regional executive power and was told that the journalist either had to return to Azerbaijan or he would never see his family and children again.
Teymur Karimov himself says that the pressures he is facing are due to his critical comments on Facebook and his youtube channel named FreedomAZTV.