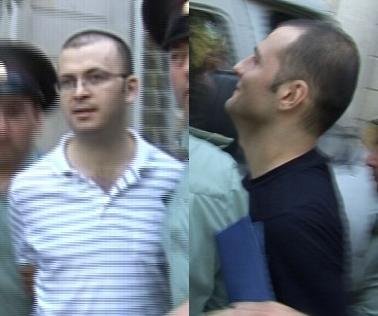 Today, 4 September, in the Sabail District Court, under the chairmanship of judge Araz Huseynov, a preliminary hearing was held on the criminal case under articles 221.2.1 (hooliganism) and 127 (inflicting intentional minor bodily harm) against young bloggers Emin Milli (Abdullayev) and Adnan Hajizade.
Defendants Adnan Hajizade and Emin Milli, their lawyers Isakhan Ashurov and Elton Guliyev, state plaintiff Jeyhun Karimov, and Vusal Mammadov and Ilkin Hasanov as injured party and their representative Zaur Ibadov participated in the preliminary hearing.
Defense lawyers filed a motion to conduct the hearings in a bigger hall and via online system, but the judge did not fulfill the motion.  Journalists, representatives of diplomatic corps, and local and international organizations participated in the hearing. Many of the monitors were not permitted to enter the court hall after all the seats were filled.
The judge discussed the Institute for Reporters’ Freedom and Safety’s appeal to get permission to film the hearing and did not fulfill the appeal. The judge fulfilled defense lawyer Elton Guliyev’s motion that the court should film the hearing.
The motion of Adnan Hajizade and Emin Milli’s lawyers to throw out the case because their rights to defense were violated while they were held in the police department on 8 July and to resend the case back to the prosecutor’s office was not fulfilled.
The judge rejected defense lawyers’ motion in connection with changing of pre-trial detention that was adopted against the young bloggers.
Isakhan Ashurov and Elton Guliyev submitted the list of evidence in connection with the case and asked the court to receive phone conversations of the defendants during the day when the incident happened and footage from security cameras, and to invite several people related to the incident to court as witnesses.
After the consultation the judge declared that the list of evidence was not accepted, and to consider the case on the essence, he scheduled the next hearing for 16 September at 3:00 p.m.
On 8 July, at approximately 8:00 p.m., Emin Milli and Adnan Hajizade were sitting at a table in “Lebonese” (Livan) restaurant along with several other young adults, when two people that looked like sportsmen came up to them, and attacked them causing physical injuries. Although they appealed to police as victims, police detained Adnan and Emin as suspected persons for 48 hours and freed the attackers. On 10 July, Sabail District Court issued a decision under article 221.2.1 (hooliganism) of the Criminal Code to sentence Emin Milli and Adnan Hajizade to two months pre-trial detention. On July 20 the Appellate Court upheld the decision of the lower court. Investigation of the criminal case was concluded and a criminal case under articles 221.2.1 (hooliganism) and 127 (inflicting intentional minor bodily harm) was instituted against E.Millli and A.Hajizade and the case was sent to court to be considered.

HEARING CONDUCTED ON LAWSUIT OF IRFS CHAIRMAN AND IRFS EMPLOYEE