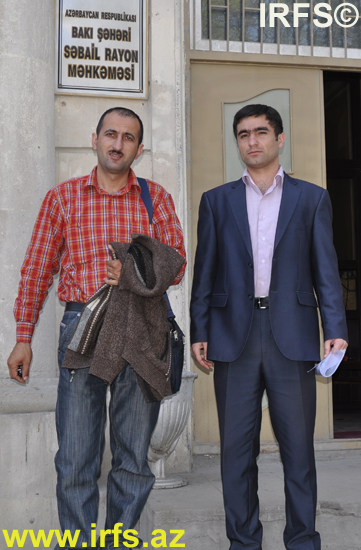 Today, 11 May, in the Sabail District Court, under the chairmanship of Judge Famil Nasibov, a preliminary hearing was held on the lawsuit Institute for Reporters’ Freedom and Safety (IRFS) employees– Idrak Abbasov, Elnur Mammadov and Gambar Gambarov against the Ministry of Internal Affairs.
Plaintiffs Idrak Abbasov and Elnur Mammadov participated in the hearing.The Judge issued a decision to accept the lawsuit for consideration

On 8 October, during an operation held by the Ministry of Internal Affairs regarding the arrest of the Editor-in-chief of “Milli Yol” Newspaper and Poligon Information Agency (PIA.AZ) Shahin Agabeyli and his Deputy Radil Mammadov, the representatives of the Institute for Reporters’ Freedom and Safety Idrak Abbasov, Elnur Mammadov and Gambar Gambarov, who were filming the incident, faced harassment by plain clothed people. Their video-cameras and photo-cameras were forcefully taken from them and confiscated. IRFS employee Elnur Mammadov was taken along with Sh. Agabeyli but freed on the road. IRFS representatives appealed to the Ministry of Internal Affairs to find and punish police employees who acted against the law; however, their appeal was not considered.