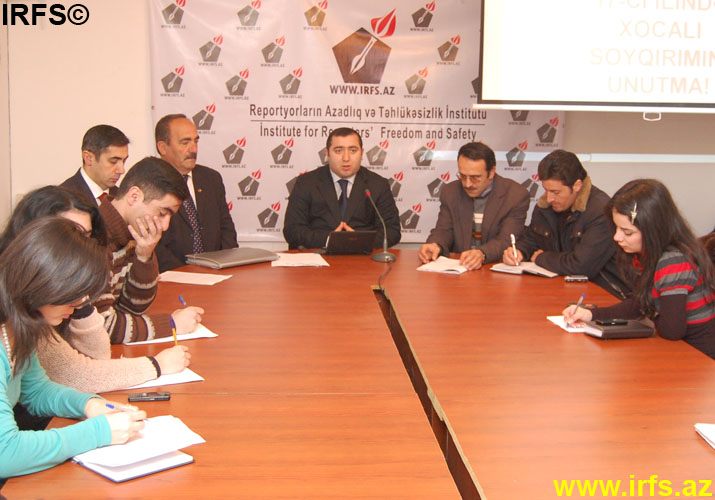 Today, 6 March, in the press center of the Institute for Reporters' Freedom and Safety, “Yeni Chag” Newspaper’s World Congress of Azerbaijanis (Azerbaijan) and Talat Pasha Committee (Turkey) conducted a press conference in connection with work they have done jointly within the framework of “Do not forget Khojali Tragedy during its 17th year”.
“Yeni Chag” Newspaper Editor-in-Chief and DCA Chairman on Supervision-Revision Commission Agil Alasgar said that DCA has conducted events within the campaign in different countries between 25 February and 1 March. According to him, the purpose of holding “Do not forget Khojali Tragedy during its 17th year” campaign is to deliver Azerbaijani truths to the world community.

A.Alasagar noted that on 26 February, during a press conference organized in Turkey’s Atilla Ilhan Kultur Center Turkish public was reminded of Khojali tragedy. DCA conducted a march-rally in Belgium’s capital Brussels in connection with the genocide using slogan “Do not forget Khojali, do not let it be forgotten!” At the initiative of Azerbaijan’s embassy to the Republic of China and DCA Youth Organization a remembrance was held regarding the genocide in the “Shusha” Culture Center.
The chairman and members of DCA said that they will continue their campaign.

WHO HAS AUTHORITY TO APPROVE MONUMENT?